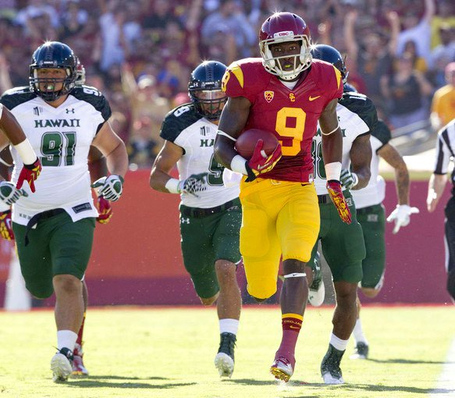 I am glad Hawaii made the spread showing the Vegas oddsmakers that history doesn't repeat itself the last time the Warriors played here at the Coliseum(63-17 in 2005). The 93,000+ in attendance were glad USC rung up the scoreboard early so they can beat the L.A. late afternoon traffic.

The Trojans made it look easy putting up 35 unanswered points in the first half. Head Coach Norm Chow for Hawaii would say his team could have done way better than they showed. But he would also say that he was impressed with his team efforts on the field. They did not quit on every play and that's all Coach Chow could ask for in his first game as a head coach going against the number one team in the country.

Matt Barkley showed a bit of his Heisman side with impressive numbers going 23-38 377 yds, and 4 TD's. His completions would have been higher if his main targets Robert Woods and Marqise Lee caught a couple of catchable passes. Newcomer Silas Reed made a nice impression for the Trojans with 9 carries for 57 yards and one touchdown. The final big blow to the Warriors was Marqise Lee 100 yard kick off return for a touchdown.

Hawaii's secondary all day were right on Woods and Lee. Unforturnity they needed to hold them several times to do so and were called for pass interference. Adjusting to a new offensive scheme for the first time in nearly 15 years, the Warriors turned the ball over four times and endured some early struggles before finding its rhythm in the second half. The Warriors showed that rhythm with a 12 play 69 yard drive for a touchdown.

QB Sean Schroeder numbers were average with 24-39, 208 yds, and one touchdown. He threw a 18 yard strike to Scott Harding to give the Warriors their first score of 2012 in the 3rd quarter. He also had 2 INT's and a fumble. Schroeder's backside was pretty much on the ground most of the game as the Trojans sacked him six times.

The Trojans out-gained UH, 353-83, by halftime and finished with a 475-264 yardage advantage. That was a big question mark for Hawaii before kick-off. Will the offensive line give Schroeder time to throw? I think the running game will improve with Will Gregory getting most of the carries and putting Joey Iosepa at fullback to bull-dose the linebacker down. Watching the tight end in our formation was something new and I was pleased to see them utilize the position well. As far as the receivers all they need is more reps from Schroeder. There were a lot of easy passes that were catchable but could not connect. The defense line was better than expected closing holes and minimizing yards from the Trojan's backs. We will see if they can improve on that for their next game two weeks from now against Lamar.

But for now the Warriors will lick their wounds and head on home and have a much needed bye week to work on their mistakes.