The final public forum was held for the proposed new on-campus stadium for Colorado State Wednesday night. The meeting was standing room only and the Coloradoan had reporters on site and had a live blog that was lively with talk for and against the stadium.

The meeting was there to provide even more information of cost, location, revenue and options for what to do with Hughes Stadium. Reading through the comments of the live blog it seems that there is a split for those for and against the stadium.

Those for the new stadium are praising new athletic director Jack Graham for using private funding to pay for the stadium instead of using public funds from the state or student tuition. The total cost of the stadium is expected to be $246 million.

Those against the stadium are saying that the money used to the stadium should be used to upgrade the academic side for the school, and that building a stadium does not guarantee it will make money or bring success to the football team. True, but there is no guarantee in anything and by pumping in $250 million into the academic side or upgrading labs that it may not necessarily bring in better teachers or higher caliber of students.

During the meeting there was a slide that mentioned stadium revenue will be between $11 - $18 million per year. The majority of the projections comes from ticket sales and can fluctuate greatly, so part of the annual revenue will require the football team be successful.

In my opinion with the money all coming from the private sector that it should be built, and Graham makes a good point with this quote from the meeting:

"We are not the least bit interested in engaging in a nuclear arms race... against other universities, but CSU does need to compete."

To get to the level to be able to compete with the Mountain West and get into the top 25 polls more frequently this stadium needs to be built, and the positives out weigh the negatives.

A decision was not made Wednesday night and one will not be made until the end of the summer:

CSU President Tony Frank has made it clear that decision on whether or not to build #CSUStadium will be made by him, w/ input from committee

Part of the reason for a few more months is to decide what will become of Hughes Stadium.

Here is an artist rendering of the proposed stadium: 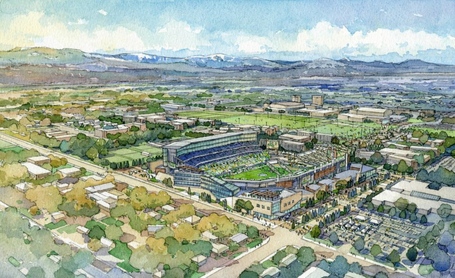 Colorado State is getting closer to having an on-campus stadium