Football guru Phil Steele has released his 2012 preseason Mountain West all-conference team. The new comers to the league are making their presence felt as Fresno State has the first-team selection quarterback in Derek Carr and the second-team quarterback is Cody Fajardo. The first long-time mountain West quarterback to show up on the list is Wyoming's Brett Smith.

One shock that was found is that Colorado State earned five players on the first team, and six if one includes special teams, and I chuckle that Colorado State running back Chris Nwoke is named to a first team given how bad the Rams rushing attack has been. However, Nwoke is a talent and improved over the tail end of last season and he should be one of the top three backs in the Mountain West this season.

With so much talent leaving the league such as Kellen Moore, Ryan Lindley, Ronnie Hillman, Asher Clark, Tim Jefferson and others there is a lot of room for new stars to make their mark in this league. 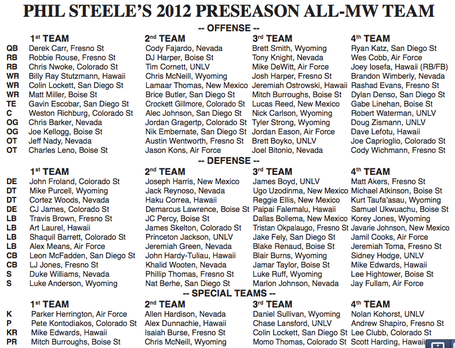