Fresno State is doing it again. After ending the regular season with a .500 record (25-25), Fresno State has advanced through the WAC Tournament and defeated Sacramento State in two consecutive games in the championship to get an NCAA Regional berth, all without one of their top pitchers in Tyler Linehan. 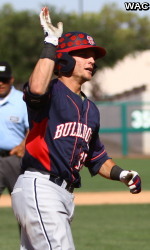 On Saturday, Fresno State rallied from 3-0 and 5-3 deficits to win 9-6 behind pitching from Garrett Mundell and Gene Escat and force a second game against the Hornets. Pat Hutcheson, Trent Garrison and Kenneth Wise each notched two hits in that game.

The subsequent elimination game Sunday lasted 13 innings, with Thomas Harlan going 7 innings, Justin Haley 3.1, and J.D. Salles closing it out for the final 2.2 innings. Jordan Luplow, named WAC Tournament MVP with 10 RBI over the course of the tournament, broke a 3-3 deadlock in the bottom of the 13th inning with an RBI single.

The Regional assignments will be announced tomorrow on ESPNU at 9:00 AM PT