San Diego State To Play Georgetown In USS Midway Game, According To A Report

Share All sharing options for: San Diego State To Play Georgetown In USS Midway Game, According To A Report

The San Diego St. Aztecs and Georgetown Hoyas are reportedly scheduled to play aboard the USS Midway Museum on Veterans Day. The event has been officially announced and will be called "Battle on the Midway," however the the two teams will not be officially announced until after the NCAA Tournament.

With the Carrier Classic between the Michigan St. Spartans and the North Carolina Tar Heels being a success it was natural for another game of its kind to be held.

Having a basketball game on an air craft carrier is just plain awesome and the pictures from the Carrier Classic show how unique of an event this is: 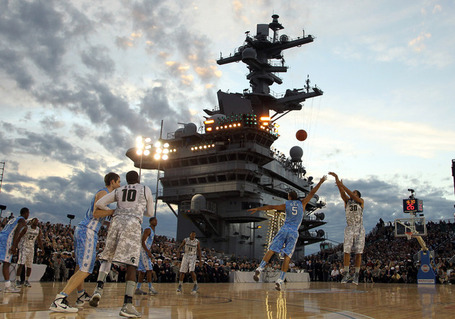 Outside of being played in a one of a kind venue, the event will also be in conjunction with Barry Zito's Strikeout for Troops and a concernt on Nov. 11

The game time is already announced as a 7 p.m. ET tip and it will be broadcast nationally which likely means on ESPN.