UNLV Rebels Could Be A Sleeper Team

Share All sharing options for: UNLV Rebels Could Be A Sleeper Team

Out of all of the Mountain West teams the UNLV Runnin' Rebels is the best option as a sleeper team who could make it to the regional final. Right now UNLV is at 20-to-1 odds to win the South Region. UNLV played in a tough league, they rebound well and they can score points in a hurry.

Also, do not forget their early season upset win against then-No. 1 North Carolina Tar Heels. Getting past the Baylor Bears could either be a difficult task or a walk in the park. Baylor played great at the beginning of the season and during the Big 12 tournament, but there was a stretch where they were just an average team at best. At least for me I see UNLV going to the Sweet 16.

First up is Nick Fasulo of Searching For Billy Edelin who is as high as anyone on UNLV, and thinks they will upset the Duke Blue Devils in the Sweet 16 and make it to the regional final against Kentucky:

Fasulo's rationalization makes sense for UNLV getting that far, and if they play their best it could happen.

Some naysayers are SB Nation's Bill Connelly and Chris Dobbertean, both who see UNLV falling to Baylor in the second round. Both just blast through their picks so there is no explanation for UNLV losing to Baylor.

The majority of people picking brackets over at Yahoo! have UNLV falling to Baylor. 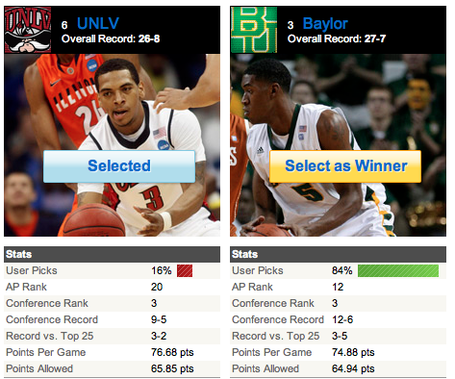 That is my pick in my own bracket, and I think UNLV can get past Baylor.

Before I forget there is former North Carolina Tar Heel Kenny Smith who thinks UNLV is a dangerous team as well:

Yahoo! Tourney Pick'em supports SBNation and the best college sports tournament of the year. Join the bracket pools of Drew Brees, Michael Phelps, and Lil Wayne-- all while competing in the $5 million Perfect Bracket and $10,000 Best Bracket Sweepstakes. Be part of the best and biggest Yahoo! Sports tourney game yet – sign up today!