Share All sharing options for: 2012 CBI Tournament: TCU, Wyoming In The Field

The 16-team CBI Tournament is one step below the NIT, but it is a post season tournament that allows teams continue playing and get better for the 2012-13 seasons. From the Mountain West, both the TCU Horned Frogs and Wyoming Cowboys elected to play and both will be hosting games.

TCU is hosting Milwaukee who finished the year 20-13 and comes from the Horizon League where they went 11-7 in league play. Milwaukee is a slow it down team that likes to grind out their games and average only 63 points per game.

Here is the bracket: 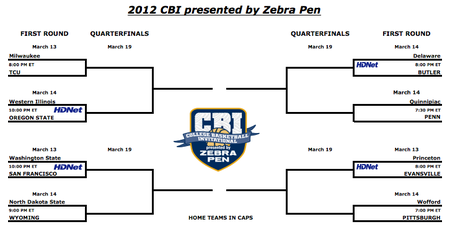