The 2012 recruiting class for the Colorado St. Rams was ranked No. 9 out of the 10 teams, but that was to be somewhat expected as Colorado State has finished 3-9 over the past three years and brought in a new head coach.

With new head coach Jim McElwain coming in late he talked about how he put together his class which was primarily recruited by the former staff during his press conference:

"I think the thing is we did a great job on making sure we evaluate what is there. We did go out and pick up quite a few based on our connections, based on our evaluations, and worked feverishly through the night and on the road to make sure that we answered those character issues and pacesetter issues with each and every one of them. So as you can see there is a mix of both. Now one thing that we did do and I believe this as well, there were some of our players in this class that were committed and had commitments to the previous staff. You don't commit to a coach, you commit to a university. I felt it was important we stood behind some of those as well; the ones that waned to still be a part of a great university that is on the move."

McElwain also discussed recruiting they type of players he wanted:

"I think size and getting control of the line of scrimmage. You have to be strong up the middle. If you can't stop the run and you can't run, you are in for a long day. Being physical at the point of attack and everything you do gives you an opportunity to be successful. So I think we answered those needs. I say we think we answered those and we'll find out. Recruiting is an imperfect science. It isn't necessarily all about size. It isn't necessarily just about speed. It is about being a pacesetter. This program was built on pacesetters a while back and that is the direction we are going."

The whole transcript can be found here. 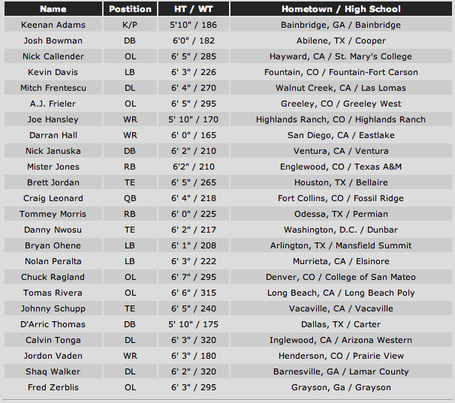