Share All sharing options for: TCU Upsets UNLV In Overtime, 102-97

First it was San Diego State who lost to Colorado State and now it is UNLV who suffered a loss to an inferior opponent in their 102-97 overtime loss to TCU. The loss only hurts UNLV's NCAA tournament seeding since they are a lock to make the tournament. It does however create an interesting league race down the stretch. Right now two loses separate first place from sixth place.

As for the game last night, TCU overcame a double-digit deficit in the second half to win this game. They were led by Hank Thorns who scored a career-high 32 points, with eight coming in overtime, and he hit back-to-back three-pointers to tie the game at 83. The last two minutes of the second half was interesting as neither team could score. UNLV had a chance to go up with a Justin Hawkins three-point shot but it missed, and TCU missed three shots in their attempt to win.

In overtime TCU scored the first four points and held onto that lead and hit their free throws to hold off UNLV to get their first win over a ranked team in a long time. With the win TCU's fans rushed the court, and really was a sad effort since the game was sparsely attended. 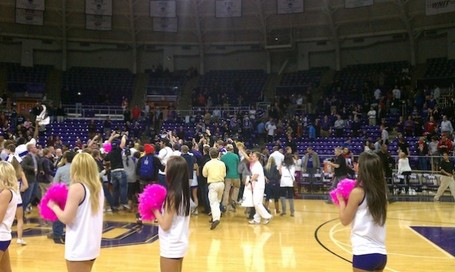