New Mexico will be breaking out a red, white and blue American flag logo on their helmet this weekend. 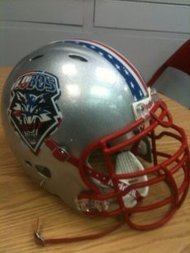 The New Mexico Lobos are sporting some new helmets for their game against the Wyoming Cowboys. They are going with an American flag theme on the helmet. North Carolina and Rutgers have followed suit with this trend.

Placing an American flag logo on a letter is one simple thing, but to do so on an animal is difficult, but the Lobos pull it off.

They also have a very nice stars-and-stripes line down the middle, and the move is coming on "Hero Days." This weekend also is Veterans Day, which is the likely reason that New Mexico is showcasing the American flag on their helmet.

The design looks good in my opinion, especially the stripe down the middle. As for the rest of their uniform, there is no word on that the jersey or pants will look like when they take the field this Saturday against the Wyoming Cowboys.