The Big East made another move by adding East Carolina for football-only, but went all in by adding Tulane in all sports.

The Big East is attempting -- and I can not stress attempting enough -- to solidify their place as the best outlying conference. The big news on Tuesday was that the Tulane Green Wave will join as a full member, and the East Carolina Pirates will be joining as a football-only member.

You read that correctly, the Big East is attempting to do a preemptive strike of possibly losing any of the three Louisville, Connecticut or Cincinnati, by adding those two programs. All three are the subject of moving, and the current rumor/report of the day has Cincy looking to go to the ACC.

Back to the moves that the Big East did today: First of all, East Carolina to the Big East is a solid move. The Pirates have a large fan base, good at football and really should have been invited earlier. They bring more to the table than Central Florida or SMU.

The Tulane move looks to be a market driven move, because the Green Wave have not been relevant in football since Shaun King was their quarterback in 1998. Their last bowl game came in 2002, NCAA tournament appearance for basketball in 1995, they don't yet have their own football stadium (coming soon though) and the actual attendance in their home game against SMU was a whopping 2,119.

Getting Tulane to get the New Orleans market is hogwash (believe that is first time I have used that word here). New Orleans is a Saints town and then a LSU town. Plus, the are the 53rd city in terms of television market size, behind Las Vegas, Albuquerque and sandwiched between Providence and Wilkes Barre-Scranton. So, yeah.

We know the Big East wants more Western teams, so they reached out again to BYU, but they said no, again. Air Force has already said no, I assume UNLV, Nevada and Fresno State had to be included on the Big East's short list.

So, how many teams said no before they got to the depths of picking Tulane? I would love to have been in the room of the Big East for when they all agreed that adding Tulane was a positive addition, just so that I could have laughed for about an hour at that idea.

I recall San Diego State athletic director Jim Sterk saying that there were plenty of Western schools interested in this national Big East conference. So where are they, Jim?

Well it is done, and now the Big East is basically turning into a minor upgrade of the 2004 version of Conference USA. Thanks to Matt Hinton of SMQ, he put together the deterioration of the Big East from 2011 to what membership is expected to look like in 2014: 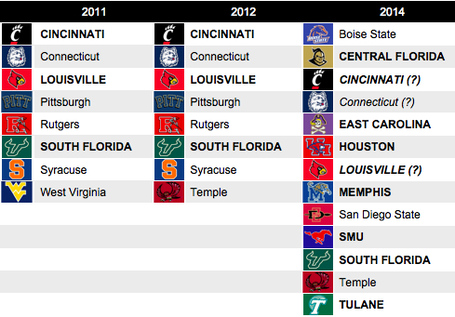 Quite a big drop off there.

What I am getting at, is that Boise State and San Diego State have to at least consider returning to the Mountain West. I wonder if the two schools feel that they are in too deep and must live, or die, with this decision. The competition argument is getting weaker by the second, because Tulane is as bad as New Mexico was under Mike Locksley; then there is Memphis who is riding shotgun with the Green Wave.

Tulane does nothing for competition, East Carolina is a decent bump, but neither do anything for TV money and that is the main reason that Boise State and San Diego State left. The upgrade in competition was also a factor, but now that is not really the case.

The next step, hopefully, is to hear what the Big East television deal is, because it could be treading near Mountain West money. If that deal is very low then Craig Thompson better get on the horn with CBS and NBC to try to renegotiate an extension with a price increase. If he can do that, then there is the key to getting San Diego State and Boise State to stay.