Share All sharing options for: San Diego State Charters A Plane To Laramie With Terrible Results

Getting to Laramie, Wyo., to play the Wyoming Cowboys is not an easy trek. Depending where you coming from teams will drive or fly to get there. When Utah and BYU were in the Mountain West they would typically drive the eight-plus hour trip on a bus straight to Laramie which can be a tough trip in the winter time. Coming from any other location schools fly into Denver and then take a bus for a two-and-a-half hour bus ride.

The San Diego St. Aztecs are on their way to play Wyoming in basketball Tuesday night and so far the trip has been a nightmare (making the Big West looking ideal in 2013). San Diego State normally opts for a commercial flight to Denver and then drive North to Laramie. However, this time they decided to splurge for a charter plan which set the school back $20,000, but it seems that was not the best choice.

The plane the team chartered could not make the 868 mile trip without refueling because the fuel tank could only go 600 miles, but with a full passenger load under 500 miles. The team planned to fuel back up in St. George, Utah but due to high winds they had to land 50 miles north in Cedar City, Utah. Not too bad, well there was a winter storm alert with snow already on the ground and more snow to come so their plane was grounded overnight.

Garret Green sent out a tweet with a photo about the weather situation:

"Just landed to get gas and now we're stuck in the snow. Smh it's not looking good." 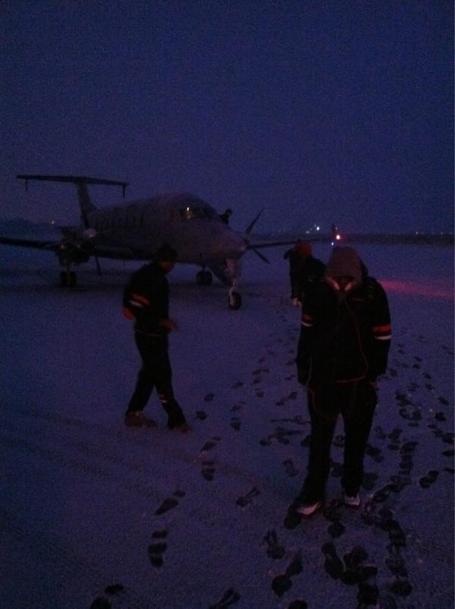 The plane finally took off at 8 a.m. Tuesday morning, but the plane had to make another stop in Grand Junction, Colo., to refuel. Green offered up another tweet:

"Fuel stop in Colorado. Next stop Wyoming. This has been one very interesting adventure ... I'm ready to play & get back to San Diego."

So a trip that normally would take at least eight hours with the flight and bus trip actually took nearly 24 hours with the weather delays. Having a schedule interrupted will no doubt have a negative effect on San Diego State, but having these travel issues against Wyoming is the worst possible location. San Diego State is 7-24 lifetime at Laramie and factor in that Wyoming is a 16-3 team this year, so this will not be an easy game for San Diego State.

One spot where Wyoming can take advantage of San Diego State is at the post position, which happens to be the weak spot this year for San Diego State. Wyoming has Leonard Washington who was named the Mountain West player of the week where he had 32 points against the Colorado St. Rams, plus Wyoming has Adam Waddell who is averaging just under 10 points a game. Those two players will need to have a big game if they want to upset the No. 16 ranked Aztecs.

One other note on this game: With the travel delays the game went from San Diego State being a 2.5 favorite to now being a pick'em.