Against The Spread Week 1: Don't Call It A Comeback

Share All sharing options for: Against The Spread Week 1: Don't Call It A Comeback 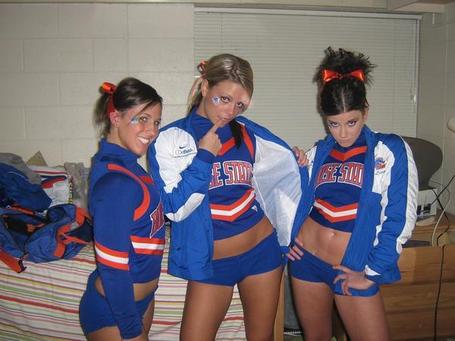 I did a weekly pick 'em column last season and not only really enjoyed myself but by some miracle of humanity I was actually above .500 for most of the year.  That is until week 10 when I went 0-5 and then followed it up with an impressive 1-4 performance causing me to hang my head in shame and retire the column for the rest of the season.  With the new season upon us I have decided to face my demons and get back up on the bull in an attempt to get my 8 seconds, or in this case to try and stay above .500 for the season.

Disclaimer: I am just doing this for fun and under no circumstances would I recommend you put any of your hard earned pennies on any of these games on my account.  I am just as likely to pick a trap game or sucker bet as I am to pick a winner.  Much like last year to make up for said sucker bets and trap games I will include a co-ed picture of the week, you're welcome.  Now on to the picks...

TCU -4.5 @ Baylor
I just don't see how Baylor is 30 points better than last season.  Sure maybe they will hold TCU to fewer points due to a new defensive coordinator and Andy Dalton's departure but I see RG3 and the Baylor offense once again struggling with TCU's 4-2-5, especially without WR Josh Gordon.  24-17 TCU.

Texas -24 vs. Rice
This line is way too low thanks in part to Texas' dismal 5-7 record in 2010.  Texas still fields the very best players that the state has to offer and Rice the dregs.  This spread will be covered by halftime. 48-10 Texas.

USF +10.5 @ Notre Dame
Nobody will want to beat the Irish more than USF head coach Skip Holtz and he has the speed on this team to do it.  Not saying they win but they should cover.  31-24 ND.

LSU +4 vs. Oregon
I don't care who is at QB for the Tigers because they just have too much talent for the Ducks at every other position.  This game will be won at the line of scrimmage where LSU will DOMINATE.  Auburn showed us last season that an SEC defense with a month to prepare could shut down Oregon's spread attack and this game will be no different.  Plus in this "neutral" site matchup in JerraWorld LSU will have the homefield advantage not only in percentage of fans in the stands but also in that they played the Cotton Bowl here last January and are familiar with the venue. 23-20 LSU.

SMU +16 @ Texas A&M
SMU returns 18 starters this year.  The only problem is so does TAMU.  TAMU started slow last season and I expect the same this year especially with all the distractions surrounding this program with it's plans to SECede from the Bevo 10.  The Aggies will win the game easily but not by two touchdowns.  28-17 TAMU.

Editors Note: Normally I would try to release this later in the week to account for line moves but I am going to be out of pocket starting tonight for a wedding weekend so I am running it now.  The lines have all shifted pretty hard in the last 24 hours and are bound to keep moving but I am going to lock my picks in with the lines provided by vegasinsider.com at the publish time.