Share All sharing options for: TCU Vs. Baylor Preview 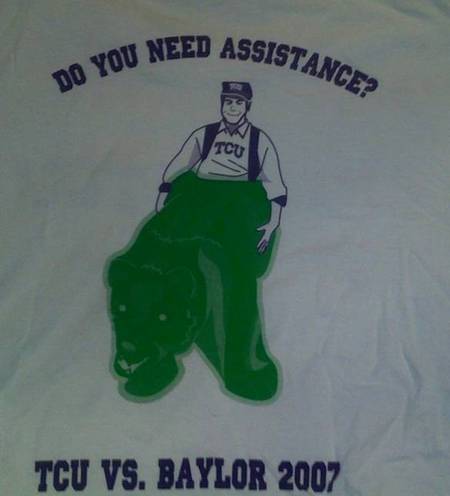 TCU at Baylor is ESPN's Friday night matchup to kick off the season this year for a reason. TCU is the Rose Bowl Champs. Baylor has an electrifying dual-threat QB who is the closest thing to Michael Vick since, well... Michael Vick. The two universities sit only 85 miles apart from eachother and were former Southwest Conference rivals. Both fanbases have the type of passionate hatred for one another that can only be cultivated through playing 106 times, making this one of the most-played rivalry games in college football. TCU is 50-49-7 all time against Baylor though in the past three meeting TCU has dismantled the Bears winning each of the three matchups by a combined scored of 89-17. But if there was ever a perfect storm for Baylor to beat the Frogs this Friday's game in Waco is it.

-Back in June I did a full Baylor-TCU preview in which I predicted a 24-17 Frog victory. Besides Baylor WR Josh Gordon transferring to Utah not much has changed and that preview should still hold up today and you can read it here.

-To fully understand the history of the rivalry I recommend you go back and read a piece I wrote last season titled, TCU vs. Baylor: Resurrecting a Rivalry.

-Click here for SpitBloodTCU.com's week 1 opponent hate piece on the Baylor Bearsfor a little better idea of the average TCU fan's opinion of Baylor. It also includes this gem: 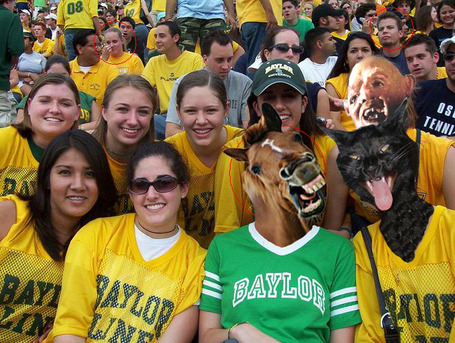 THE SKINNY (courtesy of gofrogs.com)

ABOUT THE GAME
*No. 14 TCU returns to its former campus location as it makes the 87-mile trek down I-35 to face Baylor in the 2011 season opener.
*TCU was located in Waco from 1895 to 1910, before moving to its current home in Fort Worth.
*The Horned Frogs have the nation's second-longest current winning streak at 13 in a row, trailing only Auburn (15).
*TCU has the longest road winning streak in the nation at 11 games. It's also a Mountain West Conference record.
*The Frogs are opening their season with the Bears for the third time in the last six seasons.
*Friday's game will mark the first time since 2006, the last time TCU played at Baylor, that the Frogs opened a season without Andy Daltonas their starting quarterback. In that 2006 contest, a 17-7 TCU win, Jeff Ballard made the start before Marcus Jackson came off-the-bench to rally the Frogs to victory.
*TCU has won seven of its last eight games versus teams from BCS automatic-qualifying conferences and is 16-3 in its last 19 contests against AQ opponents.
*TCU's last visit to Baylor was also on a non-Saturday. The Frogs' 17-7 win in 2006 came on a Sunday afternoon.

THE WIN COLUMN
*The Frogs have a nation's best 25-game regular season winning streak.
*TCU has had a perfect regular season each of the last two years. The Frogs' last regular-season loss was a 13-10 decision at No. 10 Utah on Nov. 6, 2008.
*TCU has won 27 of its last 28 games and is 39-3 in its last 42 contests.
*Since the start of the 2008 season, TCU is 36-3. The Frogs' 36 wins trail only Boise State (38-2).
*Sixteen of TCU's last 20 victories have been by at least 27 points. Seventeen of the 20 wins are by 17 points or more.
*The Frogs are one of just three teams (Ohio State, Oregon) to play in a BCS game each of the past two campaigns.
*The last three seasons have seen TCU's seniors graduate as the winningest class in school history. Last year's seniors won 44 games in four years. The 2011 seniors have already won 36 games in just three seasons.
*TCU has reached at least 10 wins for the seventh time in the last nine years, including six seasons with 11 or more victories.

OPENING GAME NOTES
*TCU is opening away from home for the ninth time in 11 seasons under head coach Gary Patterson.
*The Frogs have won their last eight season openers. It's the second-longest streak in TCU history for season-opening victories, trailing only the 17 in a row from 1920-36.
*TCU is 8-2 in season debuts under Patterson. Overall, the Frogs are 68-37-9 in openers.
*TCU has surrendered just seven touchdowns and 55 points in its past six openers.

MILESTONE WATCH
*With 98 victories, Gary Patterson needs two wins to reach 100 in his TCU career.
*Patterson is also 12 victories shy of surpassing Dutch Meyer (109, 1934-52) for first on TCU's career wins list. Meyer coached the Frogs to their national championships in 1935 and 1938.