With so many unknowns on this Horned Frog squad going into the season it has hard to predict the outcome of the season before we've even seen most of these guys play. But that won't stop us form trying now will it. First let's take a look at the schedule and then we'll break it down after the jump: 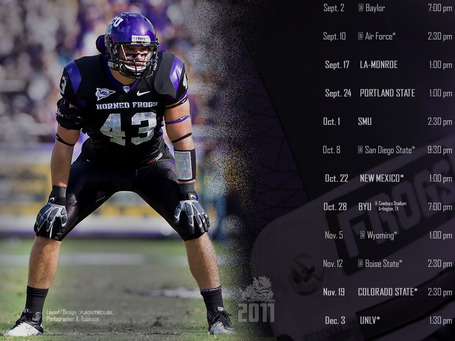 Let's break these games down into different tiers based predicted game difficulty with tier 1 being the most likely loss and tier 5 being a slam dunk win.

TIER 1
1.) Boise State
This game will most likely be the only game on TCU's regular season slate where they will not be considered the favorite by Vegas. Early lines have Boise favored by 14 and for good reason. This Boise team looks poised to have a national championship type of season and TCU has to travel to the blue where the Broncos simply don't lose. It's not out of the realm of possibilities for TCU to win this game as every meeting between these teams are close but it is too early to tell what kind of team will be headed to Boise and as of now the deck certainly seems stacked against the Frogs.

TIER 2
2.) Baylor
3.) Air Force
The first two games on the slate are both road games against teams with highly talented and experienced dual-threat quarterbacks in Robert Griffin III and Tim Jefferson. TCU should be 6-7 point favorites in each game but so early in the season both of these games are dangerous and potential losses with such a young team.

TIER 3
4.) SMU
5.) San Diego State
6.) BYU
All three of these teams went to bowl games in 2010 and are all returning their quarterbacks along with a large contingent of starters. SDSU & SMU both gave TCU trouble in 2010 and to not expect the same in 2011 would be foolish especially considering the Aztecs get the Frogs at home this year. SMU has to come to Fort Worth but in a rivalry game you can typically through all logic out the window and with a limited capacity of 32,000 at Amon Carter Stadium this season due to construction the Frogs homefield advantage should be lessened considerably. BYU is a bit of a wildcard as a "neutral" site game at Cowboys Stadium and with Jake Heaps coming on late last season he will most certainly not be the same quarterback the Frogs faced in 2010. All three of these games are potential losses as well but being later in the season will help the Frogs as the younger players will hopefully have gathered their wits by the time thse game roll around.

TIER 4
7.) Wyoming
8.) CSU
9.) UNLV
The bottom half of the MWC could all get lucky and steal a victory but only if TCU is sleepwalking and even then it's unlikely. Wyoming is a potential trap game as it is slotted between the BYU and Boise games and Laramie in November is always a dicey proposition weather-wise.

So in conclusion looking at the tiers I see 6 potential losses on the schedule and predict a realistic best-case scenario of 11-1 with an absolute worst-case of 7-5. What do you think?