Editor's note:  The video in question has been removed from vimeo.  The web address now gives the following message:

Check out this impressive Boise State promo video that was posted by "taylor little" to vimeo this past week.  It was edited, produced and directed by Boise State graduate and former Bronco "Sports Video" employee, Christopher Mitchell.  Mr. Mitchell's efforts earned him "Highlight of the Year Award" for the 2010 football season which was displayed in Las Vegas at the Fremont Street Experience.  But were they actually the efforts of Mr. Mitchell?

Now take a look at this video, or more importantly, take a listen:

Sound familiar? It should because to my untrained ears the first minute of each video sounds EXACTLY the same.  Same music, same sound effects, same narration.  So which came first?

Well the TCU video was made for the 2009 season by Concussion LLP, a Fort Worth based marketing company that was contracted by TCU Athletics in 2009 to promote their 2009 football season. The Boise State video was presumably made following the 2010 season leading up to the 2010 MAACO Las Vegas Bowl. I will let you draw your own conclusions on the timeline.

My favorite part of this whole thing is that the Boise video still contains TCU's motto for the 2009 season, "Don't Back Down" and a legendary quote from former TCU head coach Dutch Meyer, "Fight 'em 'till hell freezes over, then fight 'em on the ice!"  Both have been used in Nike Pro Combat marketing campaigns.

TCU Horned Frogs: Don't Back Down (via joegalvan) 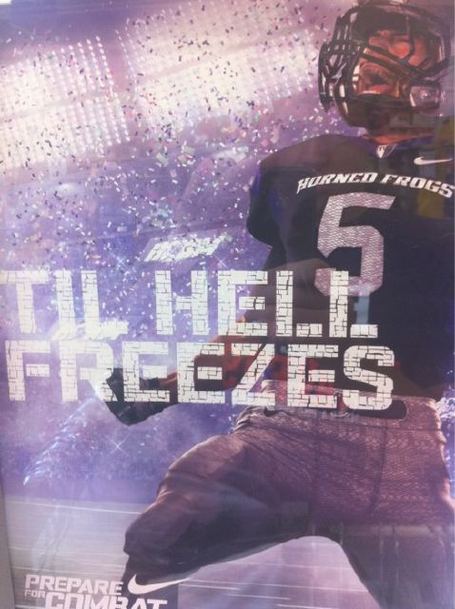 TCU fans from the TCU-centric message board killerfrogs.com (where the story originated) were not thrilled about the video, prompting one fan to have this discussion with Mr. Mitchell on facebook:

Well unlike Mr. Mitchell I am not well versed in copyright laws and I didn't even stay at a Holiday Inn Express last night so I will leave those discussions to the experts (i.e. you in the comments section).  And as Mr. Mitchell said:

I got pretty thick skin so reactions don't bother me...

So let us know what your reaction is.  Do you find this as "hilarious" and "ironic" as Mr. Mitchell does?