Uni-obsessed! Giving the uni history of the teams of the Mountain West -- The University of Nevada-Reno (joining 2012)

Share All sharing options for: Uni-obsessed! Giving the uni history of the teams of the Mountain West -- The University of Nevada-Reno (joining 2012)

EDITORS NOTE: I've made some mistakes in the post. The corrections are bolded.

After a slight delay, due to unsuccessfully trying to find nostalgic pics, I'm back with our next edition of uniform history. If you still haven't read any of these articles yet, check out the breakdown below (and seriously, where have you been?):

Special thanks today goes to PackBacker of Pistol Whipping the WAC, who very kindly sent me all the pictures that i'll use in today's post. According to him, he got the early pictures from "Legacy: 100 Years of Athletics at the University of Nevada" by John Trent. If you're curious about that book, you can find it on Amazon as well as other places. The rest of the pictures NOT FROM THE BOOK, are whatever PackBacker found for me. These can be found all over the place...especially the 2010 Nevada win over BSU (sad day for me). 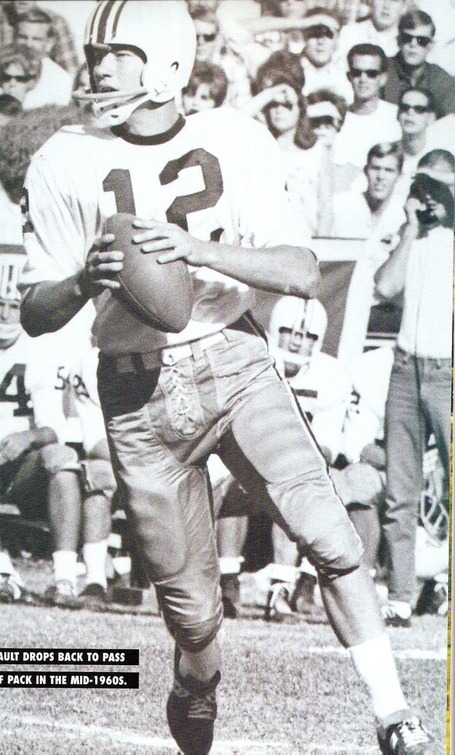 Nice, here we have the earliest example of the UNR Nevada uniform in photos from the 1960s. And who better to represent Nevada than Nevada coach and pistol guru, Chris Ault. From the grayscale, we can gather that the helmet was white with blue stripes up top. The away jersey (as I assume this is, as it is white based) used blue block numbering on the front and side, with a blue collar. The pants were silver with white/blue/white 2 color stripes. 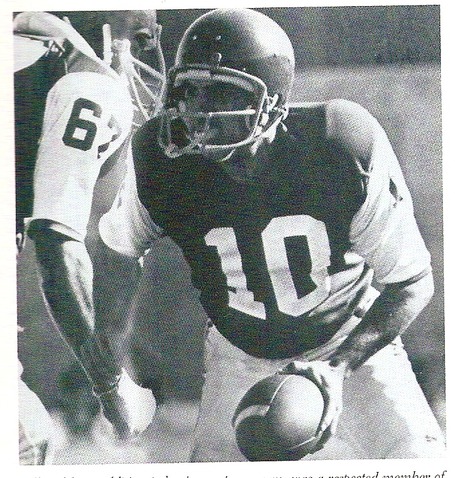 The 1970's Nevada uniform a total sleeve change, as the torso was blue and the sleeves were white. The numbers on the torso were opposite that on the sleeves (meaning white/blue). If you can notice here, the pants have changed to white, but the dual striping on the pants (very subtle in the above shot) is still there. It's very difficult to see in this picture but the helmet design was a western style "N" in white. 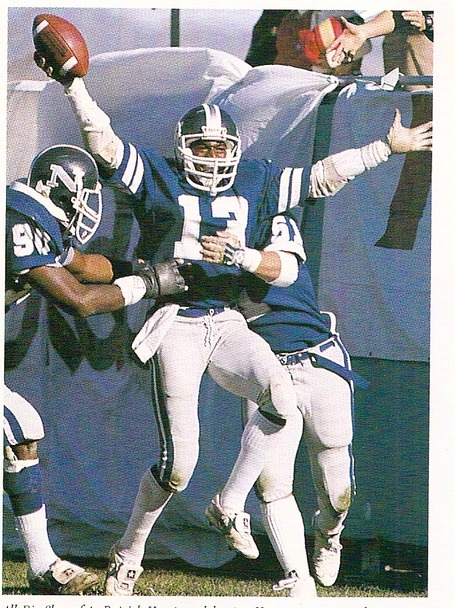 Here we see Nevada in the 1980's. This is before the helmet "Pack" change. Simplistic? Yes, but I am LOVING that "N" now with silver and white, instead of just the one. Also what is interesting to note is that for the first time in UNR Nevada history, we see actual sleeve stripes, as well as the pants being rid of the dual color pant stripes and just being one color. 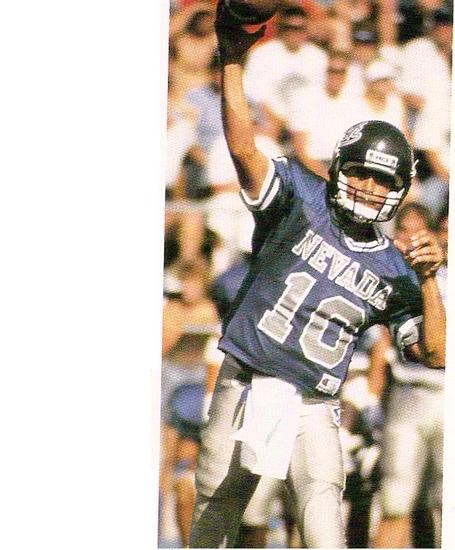 The 'Pack is here and they are not afraid to let you know! As we've seen so many other times already, Nevada had their own version of the "script logo helmet" (see: Bulldogs, Broncos etc...) and just like the others, they had a nice tenure as well. White outline with silver body:

The jersey didn't have much change except "NEVADA" was added on the front, and all the numbers/letters were white outline with silver interior. So much for the silver lining huh? BAHAHAHAHAH....

One final note, from the photo, it most DEFINITELY appears that the pants are silver with the white/blue dual stripe returning. 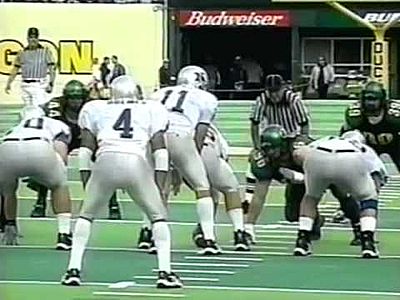 Now I really like the helmet change for the millennium. While the unis stayed relatively the same (where'd you go jersey and pants stripes?), the helmets went to the old "N" look. But these helmets were silver instead of the old blue which i thinks gives it the classy touch. However, they weren't finished, because just as Oregon (hmm, ironic they're playing them in this pic?) changed their look on a yearly basis, the Wolf Pack began a year-by-year evolution of unis: 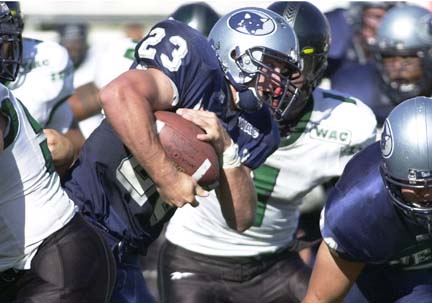 These are my favorite helmets hands down of all the UNR Nevada looks. It doesn't have the script [NAME REDACTED] look, and it is extremely unique. You know it is Nevada by looking at it. The jerseys also made the first same color appearance, looking very suave. Not much else to note here except the outline has been replaced by silver shadowing. Alas, this would be the last year of the silver helmet as well as we come to the Nevada 2003 edition: 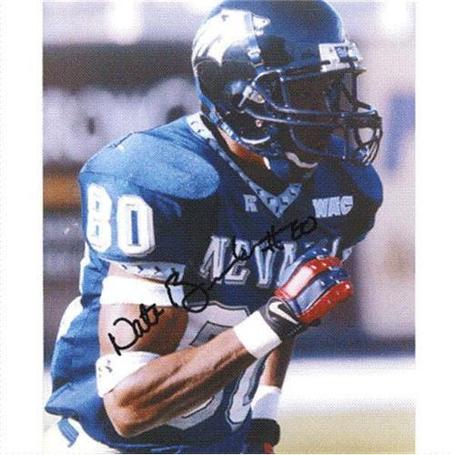 Can you spot the difference? Two differences: 1st the helmet (AGAIN) in the modern wolf look. This helmet will stay relatively the same, except become silver. The other difference? The shortlived wolf bands on the sleeves and collar. Whatever that guy who thought it was a good idea to do that, should stay away from all drugs. Period. It looks like a failed attempt of a "Nevada" style Hawaiian tapa. Well that went away quickly along with the Russel sponsorship. With the introduction of Adidas to the UNR Nevada jerseys we see the slow modernization: 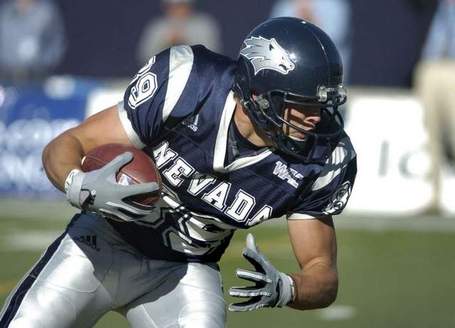 The dumb shadowing effect on the number is gone, and there are actual shoulder stripes. Very classy. To go along with it, in the 2007 season, the home uni blue was replaced in favor of a home uni SILVER an alternate silver uni was worn in two home games (my apologies I missed this tiny detail in the emai): 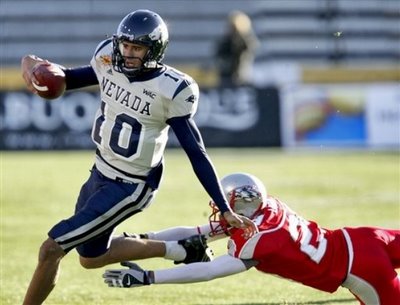 Big changes to this: first they brought the shadowing back. Next, the numbers on the side are replaced with the wolf logo. Overall, the silver just doesn't do anything for me, especially since it looks like grey. After the 2007 season the silver unis were scrapped, and the solid blue tops on blue pants came back. 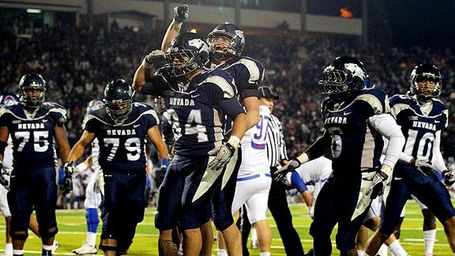 Time for my least favorite picture as well as "meh" modern unis. Adidas came and left, leaving Nike to do what they will. And what they will is what they did. The stripe/pip whatever look just looks too much like this:

Again, the silver secondary color looks too much like grey, WHICH IS NOT THEIR SCHOOL COLORS! The best thing to come out of these new unis (helmets not included, they look fine) is the pants. It really works for them, because it's complex and still simple enough not be an eyesore. The tops remind me of BSU's old "jet" look: silly and unnecessary. Note: good seasons aren't always associated with good unis.

So what to take away from UNR's Nevada's uni-history? Lots of changes, but the peak was really in the early 2000's. What is Nike planning for new unis? Who knows, nothing has been released yet, but we can expect a stripe/pipe change probably. I'd really like to see the old "N" come back. Maybe, a new uni change will bring an outright WAC championship for the 'Pack in their final year of the WAC'ed.

Up Next: New Mexico