Making The Rounds: Bruce Feldman Is Out Trending Harry Potter On Twitter #FreeBruce

Share All sharing options for: Making The Rounds: Bruce Feldman Is Out Trending Harry Potter On Twitter #FreeBruce 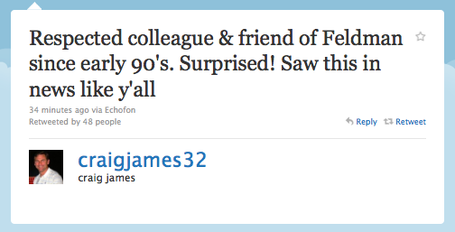 From all of this, ESPN has lost all journalistic respect with me and with a lot of others.

Now time for some MWC news after the jump.

Previewing the 2011 Wisconsin Badgers - Corn Nation
Even before Russell Wilson transferred to Wisconsin, the Badgers were looking fairly formidable. Now, the matchup between the Badgers and Huskers is looking epic.

Tale of the Tape: Sizing up the pinball quarterbacks of 2011 - Dr. Saturday - NCAAF Blog