Uni-obsessed! Giving the uni history of the teams of the Mountain West -- The University of Hawaii (joining 2012)

Share All sharing options for: Uni-obsessed! Giving the uni history of the teams of the Mountain West -- The University of Hawaii (joining 2012)

We continue our journey of obsessing over jerseys. For those of you who haven't been keeping up, there's a nice little intro below:

While we're in the off-season, it's nice to know about some different things. I've decided to take on the grueling task of researching each MWC's team (and future MWC team) uniforms and helmets. Uniforms are one of the defining characteristics of a team (as well as gameday traditions and mascots), and as someone who takes pride in trying to obtain as many jerseys of my favorite teams as possible and also obsessing on how each team dresses, I think knowing the history of each teams uni and where they're headed is important. If you have some information that i missed and you would like to share, email me atpontiaka@live.com or cjhondros@gmail.com (when you do so, put Uni-obsessed in the title so I know what it's about). I'm going to make the posts as often as I can.

Hawaii you are about to be uni-analyzed!

Most of the "in-action" photos were taken from 2009 Warrior Football Media guide.

Continuing with our uni-analysis, we have to look at the Rainbow Warriors colorful past (get it? colorful because rainbows invo...oh nevermind).

Actually, until 1999, when June Jones took over, wiped Rainbows off the face of the football team and made them into a darkhorse power, the Rainbow Warriors had some of the most colorful jerseys out there.

We'll start with the 1970's, because in the 50's and 60's, while Hawaii was a university, they did not play full college schedules because of being on the island. (You'll notice in the media guides, yearly records didn't start until about 1968). So beginning from 1970, the Warriors had a tasteful all green uni, with white numbering and a gold helmet: 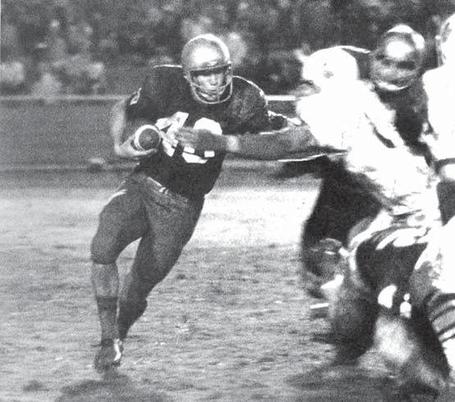 Simple as it was, Hawaii changed to unis that were more their style in 1974. Here we have a helmet from that year (I couldn't find a uni-example):

While the style of the helmet changed the very next year, the Hawaiian remained, running or surfing on a rainbow wave. The green uniforms added a touch of red, yellow and white stripes, and the white pants had green, red and yellow stripe down the side. Falaniko Noga gives us an action shot: 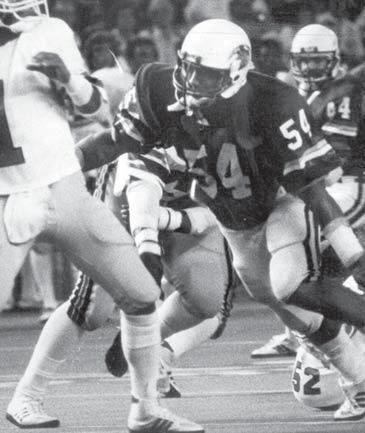 The only major changes that happened during this time of the surfing warrior helmet, was that the stripes on the arms and pants went from multi-colored to white. That uniform trend remained the same even with the next major helmet change that occured in 1982 until 1998 (A nice 16 season tenure). This helmet kept the rainbow, but removed the warrior and replaced him with a "UH." The warrior would not return until the 1999 season. Hawaii QB Tipton shows us the simplified non rainbow stripe look: 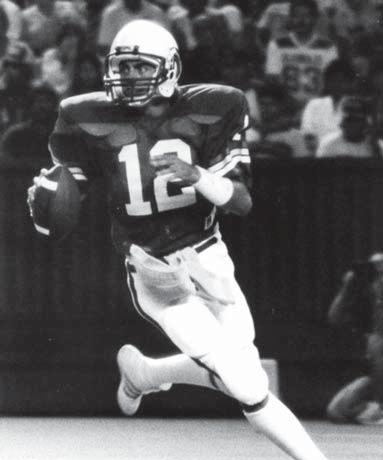 This of course didn't stop the athletic department (like ALL OF THEM) from switching to the rainbow stripes again. One can also notice that this is the first time "Hawai'i" has shown up on the uniform. Travis Sims gives us a nice color photo to work with here: 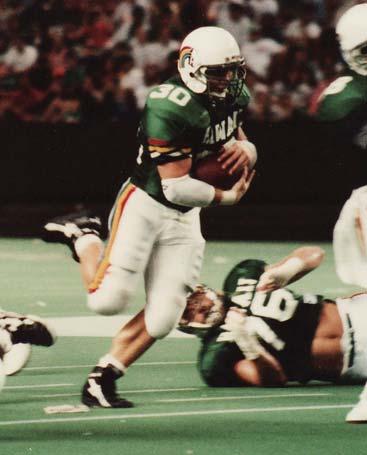 1998 came and with it came Hawaii's worst record ever at 0-12. The firing of Fred Van Appen, led to the hiring of June Jones, who made some very radical changes in the program. On the playing side, the Warriors (traditionally known for the run and Hula-T offense) became a pass happy offense. On the non-playing side, the name " 'Bows" were rid of and the Hawaii Rainbow Warriors became the Hawaii Warriors (officially in 2001). Year one of the Jones era led to an Oahu Bowl appearance and victory. The helmets became black with the surfing Hawaiian making his final(?) appearance. Nothing about the main unis changed though: 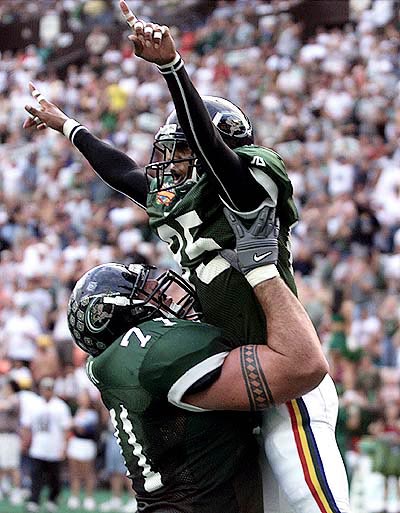 The next radical change of style would come only a year later, when the Warriors embrace their Hawaiian style in a completely different way. No longer the cartoonish Kamehameha-like figure, nor the rainbows. A giant island style "H" was put on green helmets (and silver for away matches in 2005-07). The solid green unis returned with the island bands at the bottom of the jersey as shown below: 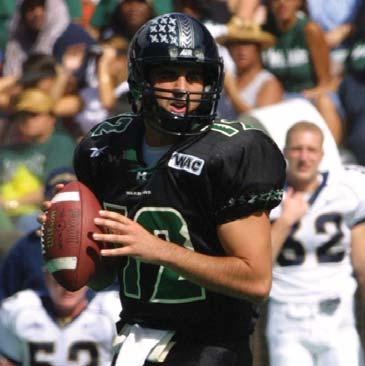 In 2008, Under Armour "Nike-fied" the Warriors look even more. The tapa (for as is the name of the island design) extended to the arms, not just the numbers. The home unis became black and green, while there is a green/black alternate uniform. HAWAI'I is written across the front top of the unis: 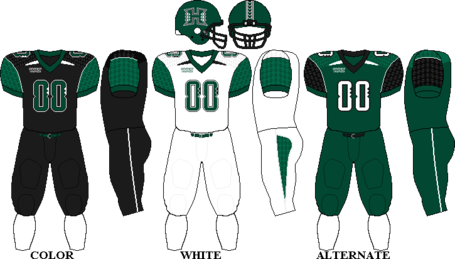 So what have we learned from Hawaii's uni history? If anything, it's that drastic change can occur within a "tradition" of the cultural area around it. I would say that the rainbow defined Hawaii as well as the warrior, however, with the introduction of the tapa to the uniforms and doing away with the "Rainbow Warrior," I believe that the drastic change did not do away with the culture of the Islands, but rather brought a different aspect to it. What can we say about any potential upcoming changes? Well Hawaii and UA are in the midst of an 8 year sponsership contract, so who knows, however because of this most recent change (being 2008), I do not forsee anything too drastic. If anything, the Warriors may want to do a one game "Rainbow Warrior" return and see the fan response. This is most likely doubtful though (which is a shame, I like these, I really want to see experimentation with the new and the old).