Phil Steele is releasing his all-conference picks and today he released the 2011 Mountain West selections. These teams go four deep,so there are a lot of players making the list. Boise State leads all teams with with nine first team selections, TCU is next in line with six players and San Diego State is represented with five players on the first team.

Most of the selections are solid, but at the fourth team spots the running back situation is grim with UNLV's Tim Connett and Colorado State's Raymond Carter. Connett has potential as he came on strong at the end of the 2011 season with a 70 yard, three touchdown game against Wyoming. As for Colorado State's Raymond Carter, this is the former UCLA transfer he was supposed to be big-time last year but he did nothing. Carter ended up with 235 yards on the season, but a better selection at his spot should be his teammate Chris Nwoke or Derek Good. Both Nwoke and Good performed well in the Rams spring game while Carter had only four carries.

The complete selections are past the jump. 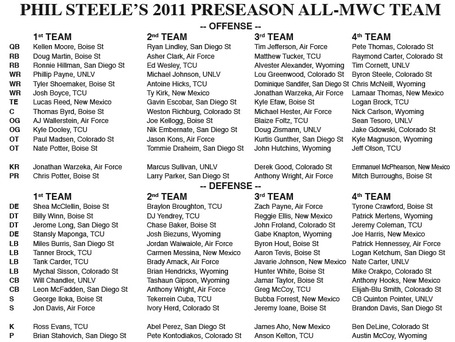