Former Michigan -- and technically former Miami quarterback -- Tate Forcier is embarking on a U.S. tour to find his next school, where he will be visiting Auburn, Kansas State, Montana, San Diego, San Diego State and USC. Here is a nice map of his future spots and it also includes Michigan and Miami. 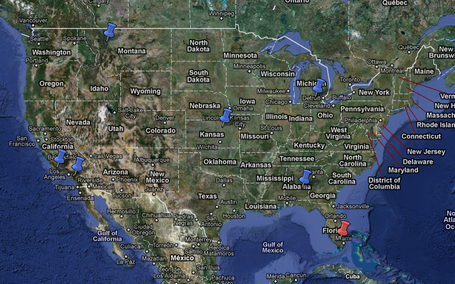 It seems that location is not an issue.

Of the school on the list USC and San Diego State make the most sense if Forcier wants to stay at the FBS level since both schools run a more pro-style offense. The reason Forcier left Michigan was to move away from a spread style offense; Montana, Auburn and Kansas State require an athletic quarterback and use the spread to some extent, so not sure why those are on the list. Montana has been on the list since it was first announced that Foricer was planning on leaving Michigan.

Forcier has some talent, but his grades are why he left Michigan and possibly a reason why he never enrolled at Miami. This would be a big name get for the Aztecs, but he has a lot of baggage coming in and may not be worth it. Just look at how his brother, Chris Forcier transferred from UCLA back in 2009 with the most bizarre press release ever.