NCAA Football 12 Allows User To Create Their Own Conference

Share All sharing options for: NCAA Football 12 Allows User To Create Their Own Conference

EA sports NCAA Football franchise has always added some new wrinkles to make us coming back each year to buy the latest version. Last year the game added the ability to recruit online and for me that was a plus, because I could do some recruiting while at work in increments and play the game at home. 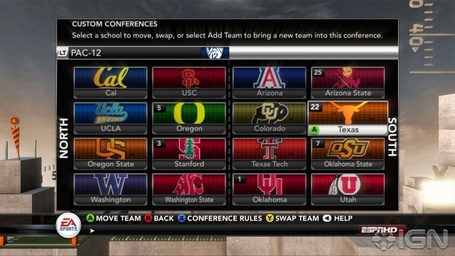 My plan was to hold off on buying the 2012 version since I did not play the '11 version enough to warrant dropping $60 bucks for this years game. Now that may change, the 2012 version allows for the user to have their own realignment, name the conferences and divisions, bowl lineups and location of conference title games. An SEC title game in a cold weather city, yes!

Conferences can be a mini-league of four teams or create 16-team leagues for super conferences. The only feature I wish they brought back was a playoff mode. I remember playing on the Sega and maybe even the original playstation that had the option to create a 16-team playoff to crown a national title.

With these new changes I may be tempted to spring the cash and go crazy with conference realignment.