Mountain West Will Need An Appeal To Become A BCS League

Share All sharing options for: Mountain West Will Need An Appeal To Become A BCS League

A fan shot was written about this topic, but I am going to add on to the subject about the Mountain West gaining a BCS bid.

The Mountain West has been hard at work trying to get into the BCS and over the past few years the league has shown to be a league to be taken seriously. In 2008 the Mountain West had three teams in the final top 25 poll for the first time in league history. 2008 was also the season that Utah dismantled Alabama in the Sugar Bowl, TCU finished seventh and BYU had their third straight 10 win season to finish at 25th in the polls.

Fast forward three-and-a-half years latter and the Mountain West is a completely different league. Utah is off to the Pac-12, BYU is going independent for the 2011 season, and TCU is leaving to join the Big East in the fall of 2012. We all know the replacements with Boise State entering this year, and then Hawaii (football only), Fresno State and Nevada will be joining in 2012 makes this league look completely different.

The most recent BCS numbers run from 2008-2012, so none of BYU or Utah's numbers count but all of Boise State's and TCU's numbers -- which include their Rose Bowl win over Wisconsin -- do count toward the BCS formula for determining what leagues will receive an auto-bid to the BCS. Here is a refresher of the three different criteria:

1. The conference must finish among the top six in a listing of the average of each conference's highest ranked team at the end of each regular season.

2. The conference must finish among the top six in a listing of the average computer rankings of every conference's full roster of teams at the end of each regular season.

3. The conference must accumulate a score of at least 50 percent of the highest ranking conference's score in the Adjusted Top-25 Performance Ranking, which measures how many teams each conference placed in the BCS top 25 and adjusts for conference size.

Here is how the Mountain West currently stacks up with the adjustment for realignment: 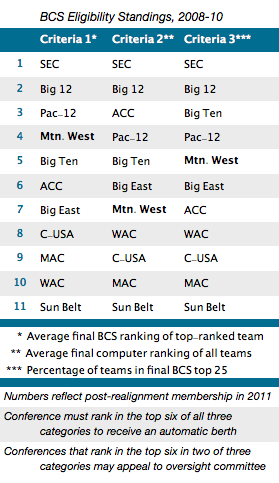 As mentioned above, a league must be in the top six in all three categories to earn a bid, and only the SEC, Big 12 and Pac-12 make that cut. The ACC will not lose their bid because of their contract with the Orange Bowl and the Big East has already earned an exception in the past to remain a BCS league. Category two which is the average of all the teams in the league is what is holding the Mountain West down with struggling teams like Wyoming, UNLV and New Mexico.

Even with the bottom teams hurting the overall strength of the league, and looking just at the numbers the Mountain West is in a good position to gain a waiver because they are ahead of the Big East and ACC in two separate categories, but it will still come down to a petition to get in.

The San Diego Union-Tribune recently came out and mentioned a waiver would be necessary for the Mountain West to gain access to the BCS:

The Mountain West Conference almost certainly won't be able to qualify for automatic membership into college football's most lucrative club for 2012 and 2013, according to data obtained by The San Diego Union-Tribune.

But it's close enough that it likely will have a strong case to gain automatic entry into the Bowl Championship Series for those two years under a special appeal next year to the BCS presidential oversight committee.
[...]
BCS rules allows for appeals by leagues that come close to qualifying. The MWC currently is faring better in two of the criteria than one league - the Big East - that already does get an automatic annual BCS berth. Because of that, the committee likely would face pressure to grant an appeal by the MWC, especially as the U.S. Justice Department considers whether the BCS is violating federal antitrust law.

The appeal would be heard by the BCS presidential oversight committee, which consists of presidents and chancellors from 12 universities, including San Jose State, Penn State and Notre Dame. The committee would vote on it next year if the MWC came close but didn't qualify.

Back in December, Commissioner Craig Thompson said he felt the Mountain West will become a BCS league. Odds are the exemption will be denied, however with the Department of Justice getting involved the BCS might actually add the Mountain West to get the government off their back so they can continue running an inferior post season.

With the Mountain West getting numbers from Boise State who had all but one year of their success outside of the Mountain West, and TCU's numbers counting even though they are going to the Big East could make things dicey.

The Mountain West better make the case to become a BCS league while they have the chance.