2011 NFL Draft: What Teams Are Saying About Their New Players

Share All sharing options for: 2011 NFL Draft: What Teams Are Saying About Their New Players

With 20 players being selected in the 2011 NFL Draft from the current and future Mountain West teams I will be perusing the SB Nation NFL sites to see what they are saying about the new draft picks.

Any Dalton was the Bengals target all along. With all of the recent Dalton media hype, the Bengals even considered trading up to get him in the first round. Even if you don't like Dalton or feel like this pick was a reach, you have to be comforted by the fact that the team wants him to be their franchise QB. Just giving him that title and building a team around him will give Dalton every chance to succeed. He will need every bit of help to shake the horrible success history of past second round QBs. This is our QB; it's an exciting time for Bengals fans. Goodbye Carson Palmer, you get your wish.

Anyways, the 49ers traded up and got Colin Kaepernick and I couldn't be happier. The team certainly didn't hide their interest in "Kaep", having been at the Senior Bowl, his pro-day, having him in for a visit, etc. They definitely needed to trade-up in order to get him as the QB's were flying starting with Cincinnati picking Andy Dalton at 35.

Young will hopefully fill the Lions' need for a speedy wide receiver. They have been looking for one for a few years now, and this pick will hopefully give them a guy that can be a burner and stretch the field.
Adding Young into the Lions' offense now gives them a solid group of wide receivers. Calvin Johnson and Nate Burleson are still the top two WRs, but Young is someone that can come into the offense and make plays. At least that's what the Lions hope he can do.

Dontay is a physical freak and he defies the laws of what a normal human can do. He's the fastest LB I can remember coming out of the draft in about 6 years. His specialty is rushing the passer; he mostly played DE at Nevada and will make the transition to strong side LB for the Bengals. I wasn't surprised by the selection of an OLB because I believe Marvin Lewis has been searching for his David Pollack. He wants to use a LB to rush the QB and be able to put his hand down in nickel situation to apply even more pressure. Moch is five times the athlete Pollack was, so hopefully he can make an easy transition to LB and give the Bengals an added boost to their young pass rushers. The only thing I personally didn't like about the pick was the value. Moch was the 95th ranked player on my board, and we took him at 66. They obviously liked him more than me.

Pettis isn't the sexy, complete package No. 1 wide receiver that many fans wanted. The biggest knock on the big man is a lack of elite speed (he ran a 4.56 forty). What he does do is make the Rams receivers a more reliable group, better hands, better ability in traffic and a better track record on his medical report than anyone else on the roster.

At 6'3" 209 lbs, there's a reason he had those kind of TD numbers in college, and he'll be a red zone threat with the Rams, something they sorely lacked last year.

This is equal parts a good pick for the team and a great pick for PR (public relations, but I guess it could be good for Philip Rivers too). I believe the last time the Chargers drafted a WR out of SDSU it was Kassim Osgood, but I could be wrong. Either way, Brown is not a physical specimen. He is not extraordinarily tall or strong or fast. However, he does all of the little things well (runs good routes, has good hands, makes tough catches) and apparently has a fan in Chargers Receivers Coach Charlie Joiner.

Brown will challenge Seyi Ajirotutu for the #4 WR spot in 2011 (assuming Malcom Floyd comes back) and, like the rest of the players picked in this draft not named Corey Liuget, will probably be asked to be a contributor on special teams.

Just as with their second round pick, WR Randall Cobb, they used a high draft pick on a position that wasn't a trendy mock draft pick. But with the now likely free agent departures of WR James Jones and RB Brandon Jackson, these picks add depth at two positions that need it. Also, it's possible that in a year or two both Cobb and Green will be upgrades over both Jones and Jackson.

Cannon, a 6'5" 358 pound mauler, played left tackle throughout his career with the Horned Frogs, but projects as a guard with the New England Patriots. He's got an extremely strong anchor, and is not easy to push around. He is a powerful guy, and has surprisingly nimble feet, although his strongest asset is his run blocking. What's interesting is that he isn't the best guard at pulling, which is something the Patriots do a lot of with their guards.

First there is this: 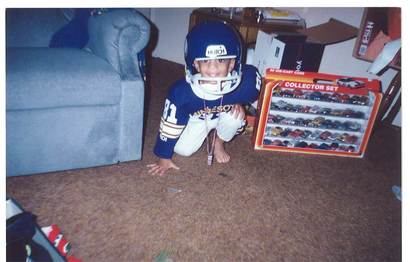 Burton measures in at just a shade under six feet tall and around 190 pounds. He also runs a 4.50-second 40-yard dash. Mike Mayock had a third-round grade on Burton, and Mayock says that he's better as a press corner than when he's playing off of receivers. The book on Burton appears to be that he's an extremely raw prospect, but has a lot of potential, and it sounds like he's somebody that could potentially be a nickel or dime corner for the Vikings. His tackling ability, from all accounts, is very good as well.

Carter is probably a bit smaller than the Steelers are used to in terms of their outside linebacker position coming in at 6'1, and 248 pounds. Carter is closer to James Harrison (6'0, 242lbs) than Lamarr Woodley (6'2, 265lbs) in terms of size but his strengths have been noted as his intelligence and his non-stop motor. Carter was a player that I have seen in mock drafts as high as the second round to the Houston Texans. Perhaps the second round was a bit high for the Fresno State product, but it appears that Pittsburgh has another solid player that should at least be able to contribute on special teams next year. Welcome to Steeler Nation Chris Carter.

With guards Daryn Colledge and Jason Spitz potential free agents, they could use some depth at the position.

I'm not sure I get the pick, although safety conceivably is a need for the team whether it be concerns about Dashon Goldson walking or something along those lines. Third round pick Chris Culliver is likely coming in as a cornerback, so I'm curious to see how Jones is utilized. It's entirely possible the 49ers front office thinks highly of him in a special teams role. Of course, at this point I really am just spit-balling here because I really know next to nothing about this guy and am finding no scouting reports.

A bit of a surprise pick, since the Rams spent both their day two picks on pass catchers, TE Lance Kendricks and WR Austin Pettis. Salas represents part of a trend in the Rams' draft strategy for offensive players with highly regarded hands and the ability to beat coverage in the middle of the field. Remember, the Rams lacked sure-handedness from receivers not named Danny Amendola last year. They don't want to make that mistake again in 2011.

This is the first defensive player that the Jaguars have taken, and Prosinski has shown the ability to play the position well in an above average Mountain West league and has great speed which will help him when he is forced to cover players.

This is my dark horse pick for the 'I can't believe we got him here' award as we look back in hindsight on this draft. I'll be the first to admit this pick barely moved the needle for me when his name was read, but the more I look into Pilares' history the more and more I love this pick.

Too much is being made of his PCL tear throughout the fan base, without paying attention to the fact he ran a 4.42 in the 40 yard dash AFTER recovering from the injury. He'll be a-okay come training camp (whenever that is). Ever since Wes Welker became a household name after being undrafted teams have been looking at these small, gritty, slot WRs who can get separation. Pilares was a former RB converted to WR who finished he 2010 season with over 1,300 yards for Hawaii. He's described as 'loving' going over the middle, and benched 19 reps... that's 2 more than Julio Jones managed and he was regarded as one of the strongest WR in the draft.

From what I have read about him, I like his potential as a receiver. He seems to project as a slot receiver. He is quick with good hands. He's a playmaker once he gets the ball into his hands. He does not have much experience running pro style routes. He got the ball on a lot of screens in college, but he is a fundamentally sound runner and has potential to learn.

I like this pick. Kerley has potential to develop into a good weapon. The fact Washington took a receiver next indicates the Jets might have needed to move up to get him.

This was a very exciting pick in the seventh round. Virgil Green was one of the top performers at the NFL Scouting Combine, and people thought he could sneak into the second day of the draft after his display of elite athleticism. Adding another weapon to the passing game was essential for the Broncos, who are bringing on a young quarterback in Tim Tebow.

Projected by some to go in the middle rounds of the draft, Jackson is a mauling offensive guard with awesome footwork and less than ideal weight, a contrast to last year's picks of Mike Johnson and Joe Hawley. He's terrific at re-directing defenders into other blockers or slowing them so they can't get into the backfield, which is a huge plus. In typical Thomas Dimitroff and Mike Smith fashion, he's also incredibly smart and hard-working.

My biggest concerns are the lack of ideal size and the fact that he missed much of his senior season with injuries. We just have to hope he can pack on weight and stay healthy at the next level.

There's no question that Williams is a projection at this spot. He does not have much experience. He wasn't on most draft radars, and there is very little information on him. Williams will likely have to compete on special teams to have a chance to make the roster. Still, I've got to question this pick. There were still plenty of good players on the board that could have helped along the interior line (Zane Taylor, Ryan Bartholomew), defensive end (Lawrence Guy, Cedric Thornton, Frank Kearse), and outside linebacker (Greg Romeus, Jeremy Beal). You can't help but think that Williams, the 730th ranked player on NFLDraftScout.com, could have been available after the draft, whenever rookie free agency eventually takes place.

He is also thought of as a high character guy with a good work ethic and good football smarts like many of the other players the Cardinals drafted this year. But he has been criticized for having inconsistent hands, he also missed the 2006 and 2007 season in college due to a foot injury.
He probably won't be one of the main targets for the Cardinals, but he should help provide some depth to the receiving corps along with being a big target for whoever the Cardinals wind up playing at Quarterback this season.