Wrapping up UNLV Spring Football: The Quarerback Race will have to wait until the Fall

Share All sharing options for: Wrapping up UNLV Spring Football: The Quarerback Race will have to wait until the Fall

UNLV's Spring Football Training ended on Saturday and, as was expected, the quarterback battle between Caleb Herring and Sean Reilly will have to wait until fall camp before a decision is made. Hauck says that Herring, a Redshirt Sophomore, definitely has the edge heading into fall camp, but doesn't want to totally put it out of the question that Sean Reilly steal the starting job during fall camp.

"At quarterback, Caleb's ahead right now, but that should be expected, as he's had a year in the system," Hauck said. "We'll certainly give both guys a chance to compete for it in fall camp and we'll see where it goes."

The annual Spring Scrimmage game was moved from Sam Boyd Stadium, where it's been held for the past few years, to the Rebels on-campus practice facility, Rebel Park. Strangely enough, the move seemed to incite more Rebel fans to show up, as the parking lots were packed for UNLV's Spring Showcase.

While the Quarterback postition looked to have tons of healthy competition all spring long, it's not the only position that needs to get better for the Rebels to be respectable this season. Head Coach Bobby Hauck's offensive scheme is an old-school downhill running game, and you can't play that kind of style with a backfield full of weak running backs or that's simply not deep enough.

Luckily, this backfield is neither. Coach Hauck wants to run a three deep backfield and he has the talent to do just that. Tim Cornett, Dionza Bradford and Bradley Randle are all currently atop the depth chart, with last season's converted cornerback Deante Purvis trying to work his way into the rotation. As well as Purvis, the Rebels also signed Junior College transfer Eric Johnson and I would expect him to compete. 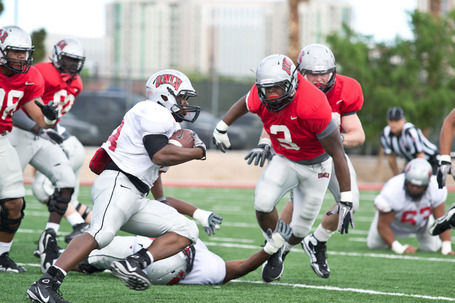 UNLV Linebacker C.J. Cox lunges for a tackle at the Rebels Spring Showcase.

The good news is that our lineup of running backs that currently own the starting jobs are all either sophomores or freshman. They will be around for a long time and could become a staple of the program.

Nothing much changed about the Wide Receivers, especially since the players second and third down the list were suspended for the spring due to team violations. Phillip Payne is expected to bounce back for his senior season after having a down year in 2010, while Michael Johnson and Brandon Babineaux, who were the suspended players, should help cutdown on the issues in the passing game.

The defense, which was a key part in UNLV's struggles last season, has a ton of new faces. Unfortunately, most of the talent with starting ability along the line won't be made available until fall camp arrives. The only things that we can be sure of on the defensive side of the ball is the defensive backs.

Will Chandler, who received credit for 5 turnovers at the cornerback last season, is a lock to be on the field come September 1st in Madison. The other player with considerble talent is Quinton Pointer. Pointer was supposed to play his senior season in 2010, but an injury during fall camp that injured him for the entire season forced him to use a medical redshirt and get another shot at it in 2011.

Pointer was one of the stars from Mike Sanford's recruiting class and he turned out to be a great defensive back. Pointer's return to the team this season could lead to the defensive backs being a rallying point for the defense.

Other than that, there really isn't anything that is for sure as far as starting jobs go. Only B.J. Bell should be guaranteed a starting job along the defensive line, and a barrage of injuries last season makes the other postion races, such as the safeties and linebackers, a fight among 4 or 5 players.

At just about every position for UNLV, it is obvious that this team is amazingly young. UNLV has 49 Freshman and Sophomores and that definitely will have an impact on how this team performs, but at the same time it is great news for the future. A lot of the talent near the top of the Depth Chart is young and that means that these guys should be playing with eachother for a while. The only problem? That means inexperience at most positions could hurt the Rebels for this year, especially since they face a tough schedule against 7 teams that made bowl games last season.