PHOTO: This Is What A $200 Nosebleed Seat View Looks Like At The Final Four

Share All sharing options for: PHOTO: This Is What A $200 Nosebleed Seat View Looks Like At The Final Four

Going to the Final Four would seem like one of the best sporting events to go to. Especially last night's games which were both competitive came down to the final minute of the game. However, with these games being played in football stadiums the view is not the best. While there are no obstructive view seats at Reliant Stadium, but distant plays a factor.

Just look at this picture taken from a fan prior to the Butler-VCU game. The court is barely visible and this ticket cost about $200! 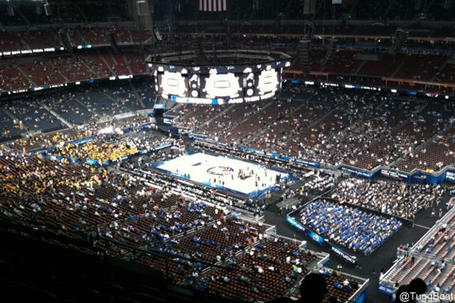 $200 for Final Four tickets is not an issue, but with a view that requires binoculars to see what is going on what is the point? Why not take that cash and go have a good time at a bar with that cash or throw a party at your house and watch on a nice television.

I guess the guy can say that he was in there.