Nevada's Colin Kaepernick was selected by the San Francisco 49ers with the 36th pick in the 2011 NFL Draft. This is the picture of him chilling at home and Colin seems very relaxed and comfortable by not being in a stuffy suit at Radio City Music Hall. 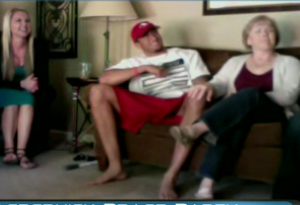 The concern now is that Kapernick needs to find a nice pair of shoes once he signs his contract with the 49ers to get ready to challenge Alex Smith for the starting job once the 2011 NFL season begins.

SB Nation has everything you need to prepare for it - NFL mock drafts, draft projections, scouting reports, the full NFL draft schedule and more. Check it all out at SB Nation's NFL Hub, our NFL Draft blog Mocking the Draft and of course here on this site for Mountain West draft news.