With the TCU Horned Frogsset to hit the field and begin spring practice at 4pm today many questions loom large for the 2010 Rose Bowl Champions.  The Frogs return an unimposing 11 starters (6 def, 5 off) from the 2010 squad that left many sets of big shoes to fill, namely quarterback Andy Dalton's. The offensive line and defensive backfield are the two areas of the roster with the most work ahead of them this spring as the Frogs look to replace 4 of 5 starters on the offensive line and 3 of 5 in the defensive backfield.  Follow along as I take a look at who the front-runners and longshots are to find "a place at the table" and earn a starting spot this spring.

2011 TCUSpring Depth Chart: Offense
Returning starters indicated in bold and number of starts by each player is in parenthesis

Position Battle to Watch on Offense: Quarterback.  The biggest issue facing this 2011 squad is preparing for life without quarterback Andy Dalton.  Dalton was the consummate leader for the Frogs and as a four-year starter became TCU's all-time leader in wins and passing yards.  At this point the QB race appears to be a two horse race between redshirt sophomore Casey Pachall (PAH-hall) and redshirt freshman Matt Brown.  Both players are highly talented athletes that were heavily recruited prospects coming out of high school.  Pachall was labeled by Rivals as a 4-star player and he chose to attend TCU over offers from Notre Dame, Florida, Michigan, and Nebraska.  Brown was ranked as the 11th dual-threat quarterback in the nation in 2010 and was also offered by Arizona and Nebraska.

At the moment the job appears to be Pachall's to lose just based off of time in the program alone.  As an early enrollee in 2009 this will be Pachall's 3rd spring at TCU so his grasp of the TCU offensive system should be the biggest difference between he and Brown right now.  What remains to be seen is if Pachall has the intangibles and leadership skills needed to be the starting quarterback at TCU.  There have been rumblings and rumors that Pachall is a little rough around the edges and is a bit of a partier, which is a major departure from the "choir boy" persona of Andy Dalton.  I feel Pachall catches some unwarranted flack in this regard mostly because he has a sleeve tattoo and tattoo's still carry a stigma to some of the older Frog fans.  Not many of them bother to mention or notice that Pachall's tattoo actually contains this motivational quote from legendary Packer head coach Vince Lombardi, "The greatest accomplishment is not in never falling but in rising again after you fall."  While Brown will have a fair shot to earn the job this spring I feel barring an injury the 2011 opening day starter will be Casey Pachall. 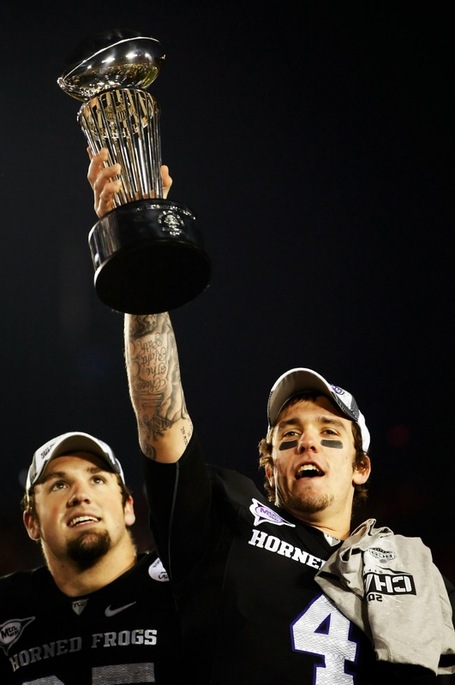 New Face to Watch on Offense: Left Tackle James Dunbar. Who starts at quarterback is going to be completely irrelevant if the player replacing Marcus Cannonas the protector of the blindside (remember that movie with Sandy Bullock?) isn't up to the challenge.  TCU has been grooming redshirt sophomore James Dunbar for this role but it is yet to be seen if he is up for the monumental challenge ahead of him.  One thing that bodes well for Dunbar's future is that he played running back in high school so he should have the athleticism and foot-speed to excel at left tackle.

Locked & Loaded Offensive Position: Running Back. The only way to describe TCU's stable of runners is as an "embarrassment of riches."  This position goes 5-deep for the Frogs and all five of them could start for any team in the country, especially the Texas Longhorns.  Unfortunately there is only so many carries to go around so look for a 3-man rotation of Ed Wesley, Matthew Tucker, and Waymon James, with Wesley receiving the lion's share of the carries. Left on the outside looking in will be the insanely talented duo of  Aundre Dean and Dwight Smith, but these guys are too good to be riding pine all season so don't be surprised if they find their way into the lineup and make an immediate impact.

Offensive Position Group With Work To Do: Offensive Line. The offensive line returns only one of five starters in 2011 with left guard Kyle Dooley being the sole returning starter.  How the front five gel together will determine how the offense performs in 2011.  The biggest question mark on the line will be who replaces Rimington Award winner Jake Kirkpatrickat center.  Junior James Fry is currently slotted as the starter but he is a relative unknown as are his backups sophomore Eric Tausch and redshirt freshman Michael Thompson, so consider this an open position battle at center.  If no one steps up at center it is possible that Dooley could move over in a pinch.


Position Battle to Watch on Defense: Cornerback, Battle vs. Verrett.  Sophomore Elisha Olabode looked to be the favorite to star at corner opposite senior Greg McCoy until he was moved to fill a large hole at free safety.  Olabode's move bodes well for the confidence coaches have in sophomore Travaras Battle and sophomore junior college transfer Jason Verrett.  Battle showed flashes of potential in spot duty at corner and made quite a few plays on special teams, including the backbreaking downed punt in the Rose Bowl.

Battle was well thought of enough to warrant offers from the Texas A&M Aggies and the Florida Gatorscoming out of high school, and while I'm not sure a Aggie offer means much the Urban Meyer "seal of approval" sure as hell does. Jason Verrett is a wild-card at this point but the JC transfer displayed eye-popping athleticism in his workout tape (3:25) and word is that he has impressed thus far in workouts and I give him a fair shot at unseating the unproven Battle at corner.

New Face to Watch on Defense: DE Braylon Broughton.  At 6'6" 272 lbs senior defensive end Braylon Broughton is an absolute hulk of a physical specimen, at those dimensions he should be a sure-fire NFL prospect but to this point Broughton has yet to translate his physical abilities into on-field production.  I feel this is the year that Broughton finally busts out and reaks havoc in offensive backfields but I said that last season as well, hope springs eternal.  Playing opposite of breakout defensive end Stansly Maponga should give Broughton enough one on one's to exploit his physical talents and if he doesn't he might be one of the bigger busts in recent Horned Frog history.  If Broughton doesn't produce look outt for sophomore Matt Anderson to step in and never step back out.

Locked & Loaded Defensive Position: Linebacker.  The headliners of this defense will unquestionably be the linebacker tandem of Tanner Brock and Tank Carder.  Carder became a household name after his stellar performance in the Rose Bowl and he looks to be the leader of this relatively green 2011 defense.  Besides the returning starters Brock and Carder look for junior Kenny Cain to come off the bench and get a fair share of snaps much like Darryl Washington in his junior year.

Defensive Position Group With Work To Do: Defensive Backs.  Three of the five positions in the defensive backfield look to be up for grabs in 2011.  In addition to the Battle/Verrett competition at corner the free safety and strong safety positions look to be fairly fluid heading into spring ball.  At free safety it will be experience versus raw talent in the form of senior Johnny Fobbs and sophomore corner turned safety Elisha Olabode.  How quickly Olabode picks up the intricacies of the free safety position in the spring will be the biggest factor into who wins the role as the "quarterback of the defense."  At strong safety sophomore Trenton Thomas is the starter heading into spring but redshirt freshman Sam Carter and Antonio Graves are nipping at his heels.  How the quickly back five of the defense picks it up is paramount to the success of the defense in 201, because the play of the safeties is the straw that stirs the drink in Patterson's 4-2-5 and the position has a steep learning curve to say the least.