John Junker Spent $33,000 For His 50th Birthday Party And Other Expenses

Share All sharing options for: John Junker Spent $33,000 For His 50th Birthday Party And Other Expenses

The 276 page report is really an interesting read if one has the time, because the stuff in the report of the now-former Fiesta Bowl CEO John Junker is priceless. Before we get to the birthday party that by those at the party said served no business purposes, here is a list of some other things that were going on for the nonprofit Fiesta Bowl:

Besides the obviously salacious stuff, bowl employees used the coffers - nonprofit coffers - to ring up an $8,400 diamond pendant, a $1,000 bottle of wine, multiple golf club memberships, thousands in gold coins, iPads, a retreat for a "Hispanic businesswomen's group" in Paris, France (you know, because bowl employees "should get out in the Hispanic community"), all other varieties of travel and pretty much anything else you can think of. Keep in mind, that's a limited accounting, before we get to the zero-interest loans paid back almost entirely by bonuses and the suspiciously lucrative contract with a security company the bowl seems to have initially backed with substantial loans to get the company off the ground.

And the Fiesta Bowl says they are shocked by this.

Now onto the $33,000 birthday party that Junker threw:

When Junker turned 50 in 2005, the Fiesta Bowl paid for a birthday party in Pebble Beach, California. The party apparently was suggested by then-Board Chair Mike Allen, with Blouin handling the arrangements. Wisneski stated that she was not permitted by Blouin to see any of the expense detail, only the top-line number. Allen stated that he did not see or approve a budget and was not aware of one.One of the attendees, Hickey, reported that he believed the event was "excessive" and "had absolutely no business purpose. "Other individuals who were on the Board at the time of the event reported that they were unaware that it had occurred. A number of top Fiesta Bowl employees and their spouses traveled to Pebble Beach for the four-day celebration. Most employee airfare records were not available to us but, even without including all the airfare, the Bowl spent more than $33,000 on this party As noted in the descriptions, the "BCS" was often listed as the purpose of the trip. Even though Allen does not recall any meetings about the BCS, he said that business was being conducted, although in a more collegial setting. 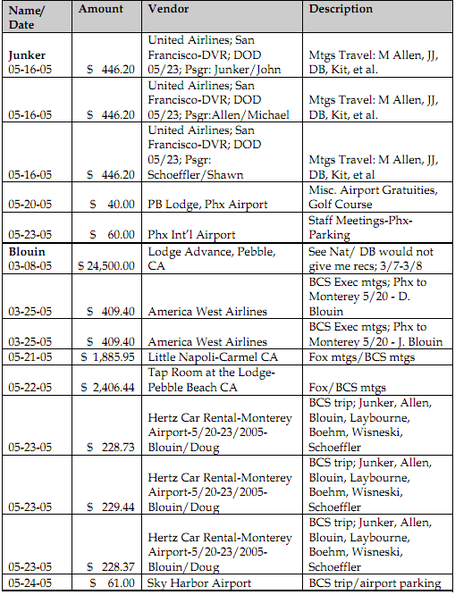 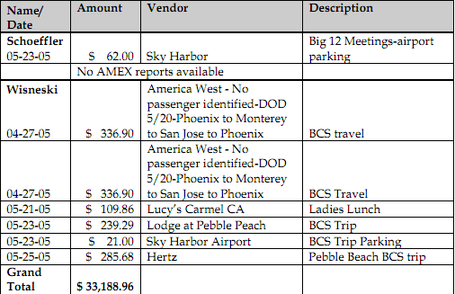 Must have been one heck of a party.

Then there is this guy Blouin who was the former COO who worked for the Fiesta Bowl for 17 years before retiring in 2005 was reimbursed for thousands of dollars worth of items that are in no way bowl related:

Wisneski also noted concerns that she had about alleged large golf ball purchases by Blouin.1188 On June 27, 2005, Blouin charged $4,129.09 to the Fiesta Bowl from Whisper Rock for 90 dozen Titleist golf balls, coded to "mktg. gifts."The following month, on July 29, 2005, Blouin charged $8,773.10 to the Fiesta Bowl for another large purchase of 189 dozen golf balls.1190 Wisneski said she has no recollection of ever seeing this of large of an amount of golf balls in the office.

McGlynn also raised additional alleged financial irregularities with respect to Blouin. Like other executives, McGlynn said, Blouin received an allotment of tickets to the Fiesta Bowl and the Insight Bowl.

(The allotments are used by executives for their professional contacts and are supposed to be paid for or billed to an internal account.)

Documents in Blouin's personnel file state that for one year "according to the ticket office, Doug's ticket allotment was short by approximately $60,000 in payments," which Blouin "coded to a marketing expense account and claimed the ticket office was in error."

McGlynn reported in another year, after the January game, Blouin paid for his allotment by handing her a FedEx box, which she opened the next day to discover contained stacks of wrapped $100 bills totaling $250,000. She said that her impression was that Blouin did not know the amount that was in the box and that he might have given the tickets to a broker to sell.

The Fiesta Bowl seems to be as sleazy as the BCS with the thought that they can do as they wish and expect no consequences. Reading through that document is quite interesting and is definitely worth your time.