BYU Vs. Florida: Cougars Fall In Overtime Plus In Game Reaction

Share All sharing options for: BYU Vs. Florida: Cougars Fall In Overtime Plus In Game Reaction

The Jimmer Show finally ended when Florida was able to take out BYU in overtime. Fredette did all he did to keep his team in the game and out of the game. Shooting wild turn around jumpers or fade away three's late in the game doomed BYU from advancing to the Elite Eight round. One thing I did think of during the game was not only if BYU had Brandon Davies, but if they also had Michael Lloyd, Jr. on the roster. He was an up-and-comer last year and had spurts of big scoring games while coming off the bench, and that would have been one heck of a team.

Great season, and I am going to try something different here and post comments about the game last night from around the web. All of these comments come via Quickish.

What does it mean for your electronic legacy to play now? Jimmer Fredette has 2.5 million Google hits. Oscar Robertson? 982K.less than a minute ago via web

New Orleans features two teams trying to give away the game. BYU through bad shooting from Jimmer, Fla through turnovers.less than a minute ago via TweetDeck 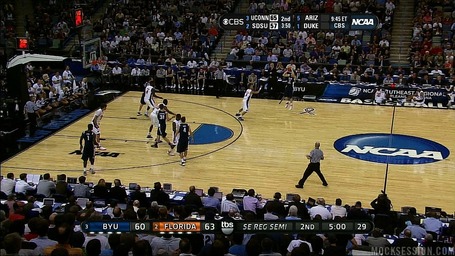 Jimmer. Gus. Overtime. Cue Wayne's World "We're not worthy" chant from every sports fan.less than a minute ago via ÜberSocial

New rule: if you killed Allen Iverson in his prime for being a ballhog, you can't be a cheerleader for 2011 Jimmer Fredette.less than a minute ago via ÜberSocial

This isn't just hindsight: BYU should have fouled Florida when the Gators had the ball with 14 seconds to go, put UF at the line (where they are sketchy) and gotten a shot to win at the end of regulation.

Jimmer loses headlines: "A Night To Fredette (@BrianLundberg) & "A Jimmer of Nope" (@gourmetspud, @allisauce24)less than a minute ago via web

Funny how terrible Jimmer looks when he's not quite playing Jimmer. Suddenly he's just a dude taking 35-footers and hollering at refs.less than a minute ago via web

BYU Coach Dave Rose: "In overtime, it looked like they had a little more than we did to finish the game."less than a minute ago via TweetDeck