Since Admiral Ackbar was mentioned as being the new Ole Miss mascot I found it interesting and posted stuff here on the site, and now there is more news. Apparently a certain group of Ole Miss alums are trying to keep alive keeping Colonel Reb as the Mississippi mascot, and they purchased a billboard dismissing the new Black Bear mascot. There was actually legislation put up to keep Colonel Reb as the Ole Miss official mascot, and the local politician who is behind this is Mark DuVall who is a Mississippi State and most likely proposed this as a joke.

Here is a photo of that billboard that is out there proclaiming their love for Colonel Reb, who oh-by-the-way has a bad connotation in the Deep South, but hey since people can say what they want in this country they can also be criticized as well for dumb ideas. 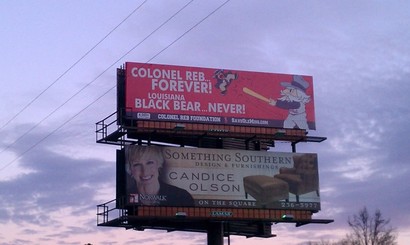 Just for the heck of it because it is awesome here is the extended version of ESPN's Admiral Ackbar commercial.