Uni-obsessed! Giving the uni history of the teams of the Mountain West -- Texas Christian University

Share All sharing options for: Uni-obsessed! Giving the uni history of the teams of the Mountain West -- Texas Christian University

Well, this season has been interesting...scandals, upsets, rematches, duds of the centuries. And in all of this, I forgot to finish up the Uni-obsessed history articles! However, fear not fashion fans, I shall finish this.

I know it's been awhile and some of the newer readers may not know what this little project is, so here is a description:

Wondering where the previous breakdowns were? Click if you dare:

Ready? No? Well too bad, TCU is about to get uni-analyzed.

TCU has their last hurrah with the the MWC tonight in taking on the Louisiana Tech Bulldogs. I'm giving them their uni-analysis as my last hurrah to them. Lets begin. Until recently, with the Nike Pro Combat Unis, TCU has had very straight forward uniforms: purple or white tops with vice versa botttoms. However, TCU's helmets have been all over the place. 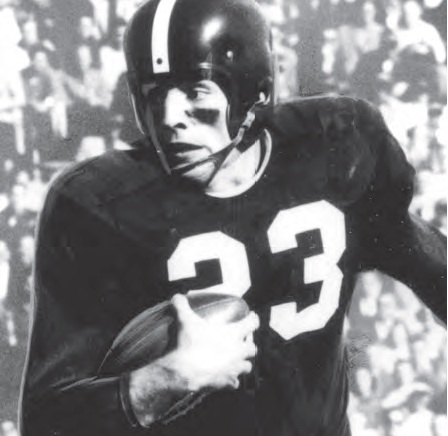 It was the late 1950's, when TCU had a simplistic white helmet with purple numbers shown below (there is a picture of a TCU-Baylor game with white helmets, but I'm unsure of the year, Bob Lilly is in it though):

In 1965, the first "horned frog" helmet appeared as well as the first uniform change to a solid jersey look, and in 1966, the frog became refined in the helmet: 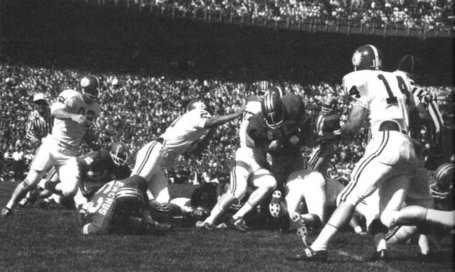 The horned frog only lasted 2 seasons however, and over the next four years, 3 new helmets appeared:

From 1971-1976, TCU changed their logo to interlocking letters and alternated helmets between silver and purple:

Finally, in 1977, TCU found the iconic logo they were looking for (and what some hard core fans still prefer). Enter, what I like to call "the Star Wars look":

This logo stayed with the whole uniform until 1991 when the modern "arched" TCU appeared. We can ask many questions about the helmet changes, however in my opinion the reason for the many changes comes in the all the losing seasons. Even with the arched TCU logo, the colors and outlines changed until 1998 with the introduction of Dennis Franchione as the coach.

Speaking of which, with the introduction of Franchione, TCU returned the horned frog to their helmet and the current logo has been on the helmets ever since:

Because of the successes of the Patterson era, Nike decided to give TCU the Pro-Combat treatment, which has led to some awesome uniforms, like the "spit-blood" uni in 2009:

"Fight 'em until hell freezes over. Then fight 'em on the ice!" 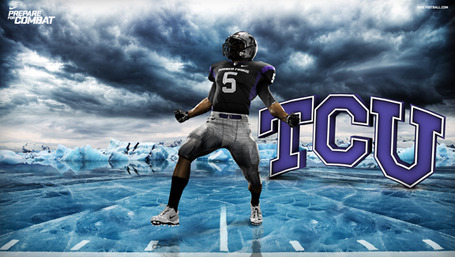 When they don't decide to wear the pro-combat uniforms, the Horned Frogs go simple purple tops with black bottoms and either the arched TCU with or without the horned frog. 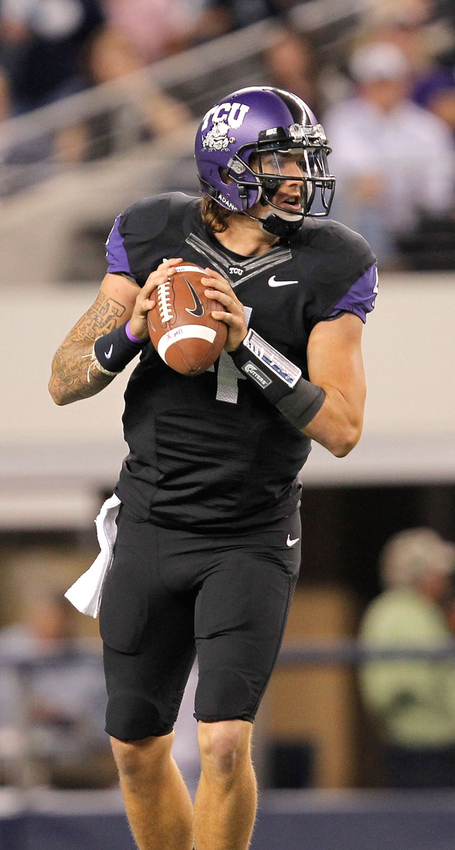 Finally with TCU making the Rose Bowl this past January, the Horned frogs decided to celebrate the occasion in their helmets, tweaking the design ever so slightly: 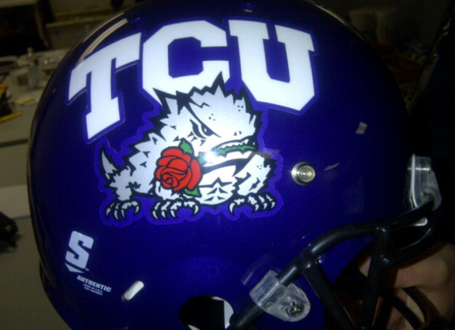 So with all these helmet changes from the past, what can we expect for the future? In my opinion, outside of any more Pro-Combat uniforms, these helmets or uniforms aren't going anywhere. TCU has an iconic look, a newly developed powerhouse program, and a coach who seemingly will stay at their side.