If College Football Had A Playoff: An Introduction

Share All sharing options for: If College Football Had A Playoff: An Introduction

I teased what this post would be about on Saturday and now it is time to get into this project. This is the third season where I have ran this project. I am a playoff guy and feel that it should be ran as the NCAA basketball tournament and every other NCAA sport that has a playoff.

I want all 11 conference champions to earn an automatic bid and then five at-large teams and no limit on teams from a certain league. To determine the at-large schools and seeding the BCS rankings will be used.

Here is the bracket: 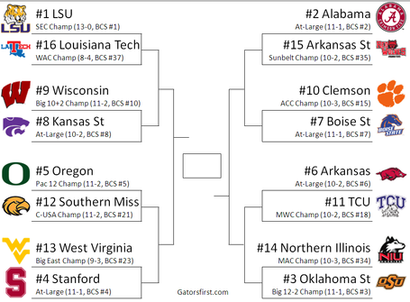 The way this playoff works is that the higher seeds host games until the Final Four where those games will take place at some neutral site location. Also a tweak in the system is that instead of advancing through the bracket as presented there will be a reseeding for each round so that the higher seeds are rewarded for having a good regular season.

I will be using What if Sports to simulate a result, but that will be used as a reference and not as the final result. The winner will be decided by voting on the website.

The first matchup begins this Monday and with 15 games they will go Monday through Friday for the following three weeks. The only exception is that the final game which is to begin Friday Dec. 30 will go through the weekend and end Monday Jan. 2.