I know this petition I set up will do absolutely nothing, but just for the heck of it I am curious how many people I can get to sing the petition I set up at Change.org to say that Craig James should be fired. There are a ton of examples to how he is a terrible AP voter and overall basher of non-BCS.

But just for fun share on twitter, Facebook, Google+ or even on your own blog, just spread the word. I want to see what numbers could be reached by this.

One of my all-time favorite stupid comments was last year during one of the BCS shows where James said that playing bad Big 10 teams were better then playing good non-BCS teams just because of that the recruited talent to places like Illinois and Northwestern were better than say Nevada or Air Force even if the latter two schools were having a much better season. Just crazy.

Also, he hired a PR firm to help get Mike Leach fired at Texas Tech and complained to Leach about his son not getting playing time. All the long ESPN stood by him for some unknown reason. He also got suspended and essentially forced out a great college football writer in Bruce Feldman. Here is some audio from Feldman on the Dan Patrick show blasting James and ESPN.

James has also been known to be a crappy AP voter and currently has 11-1 Boise State at No. 24 in his AP poll ballot and Arkansas at No. 3.

Here are a few more links of how stupid James is:

Check the top right corner, a Fire Craig James sign made it on GaneDay earlier this year. 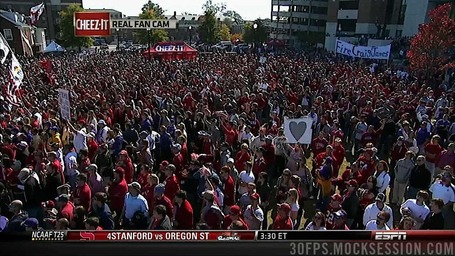 So for all of those people who dislike Craig James and use #FireCraigJames on twitter, spread the word of this petition and sign the petition and lets see how many signature we can get.