The odds of the Boise St. Broncos or TCU Horned Frogs getting to a BCS bowl game is pretty slim and neither team controls their own destiny. The scenarios for TCU is pretty simple, they need the Houston Cougars to lose the conference title game and of course beat UNLV.

That puts TCU in positon to take the automatic bid for a non-AQ team. What else needs to happen should be able to take care of itself. The loser of the Big 10 title game between Michigan State or Wisconsin should drop them below TCU in the rankings and the other is Georgia losing the SEC title game, also a likely scenario. So, the only real thing standing TCU's way is Houston winning Conference USA.

As for Boise State they need some help, because they have no shot at earning any sort of auto-bid.

Here are the BCS standings with some edits from OBNUG: 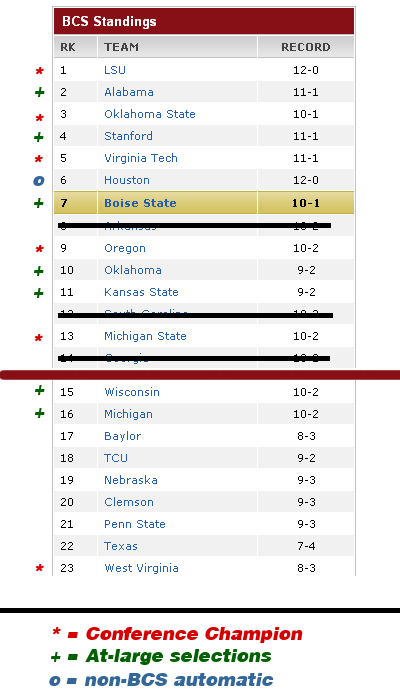 From the chart there are only a few options for at-large selections. Alabama, Stanford and Houston are taking three of the four at-large spots. The easy way to end this is with Boise State not making a BCS game is for Michigan to move into the top 14, because of they get there Michigan is essentially a lock to go to a BCS bowl game.

If Michigan does not move up to No. 14 for some reason then at-large spots will come down to Boise State, loser of the Oklahoma, Oklahoma State game and Kansas State. We can asume Kansas State is not going to be a selected so it comes down to Oklahoma State/Oklahoma loser and Boise State. Ideally for Boise State they would want Oklahoma to win Bedlam, because in the past the BCS bowls have not selected teams on a down turn. However, Oklahoma's fan base is so large that it would like be selected over Boise State.

Over at OBNUG -- where they may be a bit optimistic -- they think that if Oklahoma State can blow out Oklahoma then that would help Boise State because the BCS would not want Oklahoma. That could be true because the BCS does not like to take teams who lose their last game. Actually, thinking it over there is a slight possibility that the BCS bowls do not take a second Big 12 team.

The Fiesta Bowl which gets first selection will choose between Stanford and Boise State and odds are they would go with Stanford because of a Western school from a BCS league, plus they have hosted Boise State twice since the 2007 bowl game.

The Sugar Bowl actually gets the first overall selection due to losing their champion to the title game and they may just gamble with Houston since they are a few hour drive to New Orleans. They then get to pick third and assuming Stanford is gone to the Fiesta Bowl then it is down to the Big East champ, Boise State or the Big 12 runner up, and who knows who the bowl will want. If the Big East champion is West Virginia then they are likely to go there and if that happens then the Orange Bowl picks come down to Big 12 runner up or Boise State.

I think if Michigan is not in the picture then Boise State really has a shot at a BCS bowl game.