The UNLV Runnin' Rebels pulled off the upset of the year so far be knocking off top ranked North Carolina Tar Heels. UNC was overwhelming favorite in both polls to win the national title, but now UNC is looking to fix some holes that were exposed last night. 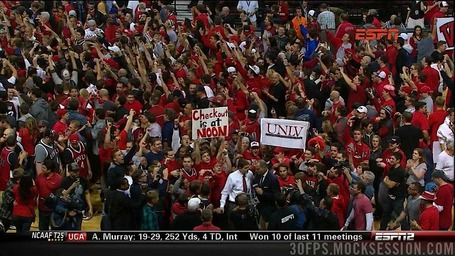 In addition to our full recap of the game posted earlier today (go read that one first) here are some highlights and others reaction to UNLV knocking off the top team in the country. Also, it is safe to say that UNLV at 7-0 is now the team to beat in the Mountain West.

First here are some highlights.

Now here are some reactions from the web:

Despite only 13 first-half points from its star trio of Harrison Barnes, John Henson and Tyler Zeller, UNC led 42-38 at halftime. But UNLV opened the second half with a 14-0 run, during which the Tar Heels missed 10 straight shots, to take a 52-42 lead. UNC tried to chip away, but the Rebels swished and pounded -- taking advantage of UNC's suspect perimeter defense, and scoring consistently on second-chance points. The Rebels, whose home arena is only a few miles away, fed off its raucous crowd. Chace Stanback led the Rebels with 28 points.

Chace Stanback, welcome to the Rebel Reign MVP circle! Techincally everyone worked as a well oiled machine and had to, to beat the Tarheels, so everyone gets the award. But Stanback, what an effort - 28 points, only 1 foul, 1 block, 1 steal, 1 assist, and 10 rebounds, a double double and all around massive performance. He was good for 4 of the Rebels 13 3-pointers, and was perfect from the charity stripe. When someone like Stanback, who has been in the background through the first five games of the season can erupt against UNC - you have yourselves one of the five deepest teams in the NCAA. Chace was a hero tonight, we salute you.

Soft interior: UNC's strength is on the inside? You could have fooled us tonight. UNC boasts several interior players who should be first-round picks in the NBA Draft whenever they decide to declare, but tonight they got their butts kicked. Not only were they out-rebounded 44-36, Mike Moser (17 rebounds) embarrassed UNC's tall but thin big men. Moser along with the rest of the Rebels managed to gather 31.7% of their offensive rebounds while UNC got just 21.1% of their chances. Both numbers are well below what either team has averaged up to this point, but if the Tar Heels are going to win games like this they are going to need to dominate on the inside. Perhaps their talented big men just are not tough enough yet for these type of games.

Ballin' is a Habit: UNLV upsets No. 1 UNC: A few quick thoughts

North Carolina looked flustered when they got down in the second half. They did not respond well to the 14-0 run UNLV went on at the start of the second half. Part of the reason was that UNC was forced to become a half-court team; with UNLV hitting shot after shot, the Heels could not get out and run -- the best way to slow down a fast breaking team is to score. But UNC also made some really bad decisions in the half-court. They forced some shots, they missed some free throws and, frankly, they looked rushed and overwhelmed.

UNLV beats No. 1 UNC; upset of the year to date - CBSSports.com

It's not like North Carolina to play the way it did Saturday night, with a lack of attack. Was it what UNLV did, or what did UNC not do that surprised him most?

"Nothing, really," Rice said by phone after the game. "I was just proud of the resolve our players showed. We have become a very good second-half team. One of the strength of our team is our depth. We have unbelievable confidence with the five guys who start and four guys who come off our bench."

UNC's probably just as good as we expect them to be. This was a bad night for them. But UNLV? Could be a lot better than we expected - and plenty expected this team to be NCAA tournament-worthy. The victory Chace Stanback, Moser, Oscar Bellfield and others got for their team, their program, their city tonight - it's season-making. It doesn't get much more motivating or valuable than to beat the top-ranked team in the country on your soil. (It wasn't a true home game, but it might as well have been.)

They were the aggressors from the beginning, penetrating UNC's soft perimeter, then kicking the ball out for 3-pointers again and again and again. When they weren't connecting on 13 of their 32 tries from behind the arc (led by a career-high 28 points from Chace Stanback), they were outscoring UNC 20-6 on second-chance points.

When the Rebels opened the second half on a 14-0 run -- taking advantage of 10 straight missed shots by the Tar Heels, plus seven points from Moser (16 points, 18 rebounds) -- UNC never recovered.

"I think that's the hardest we played, a complete game for 40 minutes, for sure,'' Moser said. "We had to do that to beat them."

Carolina was absolutely killed on the boards. UNLV outrebounded them 46 to 37, despite shooting much better from the field. More critical were the Rebels 13 offensive rebounds, which directly led to 18 points, well over the difference in the game. UNLV was a smaller team, and UNC was often in a better rebounding position; yet they couldn't get their hands on the ball.

What kept the Tar Heels in the game was some excellent first half shooting from the guards. P.J. Hairston picked up where he left off in the South Carolina game, hitting three of five three-point shots and all of his free throws, for a team-high 15 points. Dexter Strickland and Reggie Bullock were also key, scoring 12 and 8 respectively, all on dribble penetration. In the second half, however, UNC's touch went cold, and their shots became more panicked and earlier in the shot clock. They did not settle for outside shots, despite the commentary I was reading at the time. Carolina only attempted two threes in the first 15 minutes of the second half, both from Hairston. No, they kept trying to get the interior game working, but the shots became more and more ill-advised, and the rebounds kept being pulled down into UNLV hands.

UNLV can’t afford to celebrate for long after shocking No. 1 UNC - The Dagger

Under first-year coach Dave Rice, the Rebels improved to 7-0 on Saturday night by upsetting No. 1 North Carolina in the title game of the Las Vegas Invitational. The game was played just a couple of miles down the street from the UNLV campus in front of a crowd split almost dead even between the two sides.

UNLV had to play a near-perfect game and have a couple of other things go its way in order to pull off the upset, and that's just what happened. On a night where the Rebels out-hustled the Tar Heels to loose balls and simply looked like the hungrier team, they also canned 13 3-pointers and owned the defensive glass.

With what could arguably go down as the program's biggest win since claiming the 1990 NCAA crown under legendary former coach Jerry Tarkanian comes plenty of extras.

Much of the credit for making North Carolina look pedestrian for at least one night should go to UNLV, which has seized the role of Mountain West favorite from New Mexico with its sizzling 7-0 start. The Rebels are getting a nightly double-double from UCLA transfer Mike Moser, inspired play from seniors Chace Stanback and Oscar Bellfield and unexpected scoring from defensive-minded reserve guard Justin Hawkins.

It was surprising to see UNLV knock the Tar Heels off balance with a 14-0 run to start the second half and then finish them off without too much resistance, but for now we can only guess at what the result means.

There you go, dive in and check out what others are saying. Of course it is positive for UNLV with not a ton of 'what went wrong for UNC.' UNLV used a strong second half led by Michael Moser and Chace Stanback to beat North Carolina.