The Wyoming men's basketball team started off with a decent first week with wins against Western State and Northern Colorado.  They couldn't finish the job against Green Bay falling 52-44.  Guard Francisco Cruz has taken leadership of this team so far, averaging 16.7 PPG and 5.7 RPG.  It's interesting to note that Arthur Bouedo and JayDee Luster have become potential 3 Pt threats.  Leonard Washington, Luke Martinez and Adam Waddell have become solid contributors as well nearly averaging 10 points a game.  The question to be asked now is, what to make of this team?  With no difficult test coming up until Colorado, this team could go undefeated the next few games.  On the other hand, the loss to Green Bay shows that this team could be in for difficult times.  I fully expect this team to go at least 3-1 this week with games against South Dakota, Portland State, University of Maryland-Eastern Shore and Louisiana Tech. 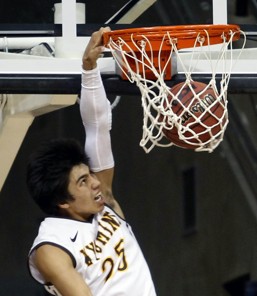 Women's BB recap after the Jump

The Women's team have struggled in their first week of play falling to Utah State and future WAC member, University of Denver.  However against, Chadron State, they managed to pick up their first victory.  Junior Chaundra Sewell looks to be a high spot on the team though as she got her second career double-double putting up 30 pts and 10 rebs against Chadron State.  With her leadership at the helm, the Cowgirls could rally around her and become stronger as the season continues.  It'll be interesting to see how they fare at the Loyola-Marymount Tournament this weekend in Los Angeles.

Read up next weekend to see how the Wyoming basketball teams fare against their opponents.