Ohio State President E. Gordon Gee stuck his foot firmly in his mouth by saying Ohio State does not play the Little Sisters of the Poor when referring to the non-BCS schools and their chances at playing for the BCS title. He later ate some crow when his fellow Big 10 schools when oh-fer on New Year's Day and with one loss coming by the hands of TCU over Wisconsin. 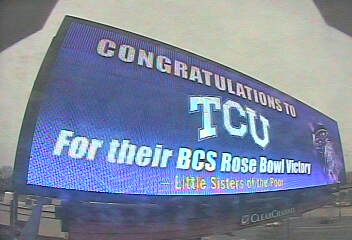 Now, the Horned Frogs are boasting their Rose Bowl win all over Columbus, Ohio with 20 electronic billboards showcasing their win around the Ohio State campus.

As for the strength of schedule argument, Ohio State's schedule was the 68th-toughest, with Wisconsin's as the 71st, and TCU's as the 80th before the bowl games. This is per USA Today's Jeff Sagarain's ratings.