Now that the nation finally knows who Jimmer Fredette is, he is still garnering buzz across the web. A lot of people are comparing him to other notable white college super stars as J.J. Reddick and Adam Morrison on twitter, and most of that is inaccurate. Fredette can beat players off the dribble and create his own shot, plus he gets to the free throw line quite a bit.

Yahoo's Adrian Wojnarowski writes about how Fredette will be an NBA player but most likely not to the extent of what he is doing right now at BYU:

From everywhere on the floor, Fredette is a relentless, ferocious scorer. His range stretches far beyond the 3-point line, and his deftness with the ball - not to mention his toughness - gets him to the basket and the free-throw line. He's scoring in the 30s, the 40s on some nights - averaging a nation-best 27.4 points per game - and perhaps it's so amazing because people just don't see that coming from a 6-foot-2 Mormon out of upstate New York. There's no debating Fredette's greatness as a collegiate scorer, but most fascinating is projecting what kind of pro player he'll be.

In the same article a Western Conference general manager predicted Fredette to be a late first round pick because of his defensive issues and that Fredette does not do enough of everything. That same scout does not deny that he could score at the next level.

This photo made the rounds and ended up on CBSSports.com she must be a pretty big BYU fan to attend a game the day here baby was due. But, there was an Oregon fan who put off getting a pacemaker implanted so that he could attend the BCS title game, a bit different but still extreme. 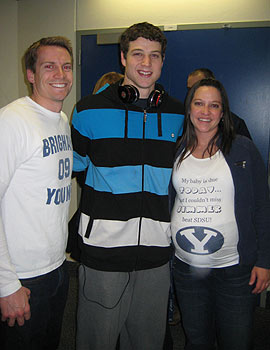