Jon Solomon of The Birmingham News took a look at the Nielsen ratings for this latest bowl season and found that the numbers took a hit from last season.

Bowl ratings were down nine percent, according to an analysis by The Birmingham News of Nielsen Media Research data. That includes an 11-percent drop for the national championship game, won in the last second by Auburn.

This should not be surprising news, and anyone who tries to spin it that way is a complete knucklehead.  This was the first year that all but 3 bowls, including all 5 BCS bowls, were broadcast on cable on ESPN instead of on the broadcast networks.  When you take the games off of broadcast television and move them to cable you are eliminating roughly 15 million homes that don't subscribe to cable so that is where the 9 percent drop comes into play, and don't let anyone tell you otherwise. 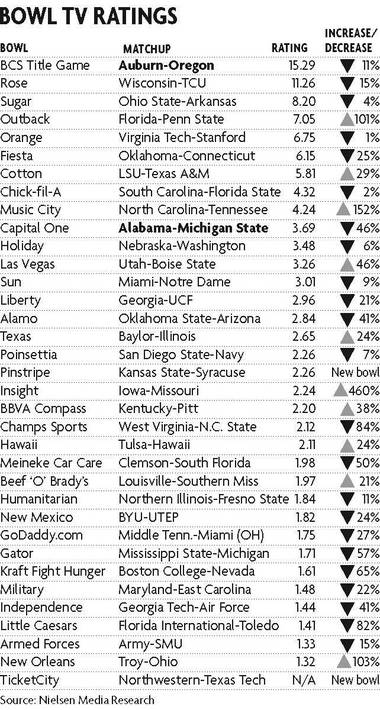