Rivals breaks down the weekends game and has Jacquizz Rodgers vs. the TCU defense as their best matchup:

Rodgers has rushed for 2,693 yards and 32 touchdowns in the past two seasons, but this will be one of the toughest defenses he has faced. TCU has led the nation in total defense in each of the past two seasons and returns seven starters from the unit that helped the Frogs go 12-1 last season. Oklahoma's Adrian Peterson, Stanford's Toby Gerhart, Oklahoma's DeMarco Murray and Northern Illinois' Garrett Wolfe (the 2006 NCAA rushing leader) each averaged less than 3.0 yards per carry and gained less than 64 rushing yards in games against TCU since the 2005 season. Rodgers enrolled at Oregon State after setting a Texas high school record with 136 career touchdowns at Rosenberg (Texas) Lamar Consolidated, and his team's chances of beating the Frogs depend on whether he has a happy homecoming. TCU's ball-hawking defense shouldn't expect to pry the ball loose from Rodgers: He has lost just one fumble in 656 career touches.

Holy crap ESPN hates TCU. They are better then the 2009 BYU team who beat Oregon State did they not see the Las Vegas Bowl where BYU won in a blowout.

corso just picked Beavers by 3 TDs... Herbstreit also likes Beavers, too, just not by 3 TDs... is there a Beavers bug going round?less than a minute ago via web

"I felt like I screwed up in the BCS game," Patterson said after practice Wednesday. "I let our people talk (to the media). I didn't take the kids out of the hotel. There was more family in the hotel we've ever had. I didn't think I ever got them focused in."

"No cell phones on Friday night," Patterson said. "We'll put the names on them, and they'll get them after the walk through on Saturday morning. I want them away from all distractions."

This is a popular feature at Addicted to Quack and here is a sample. 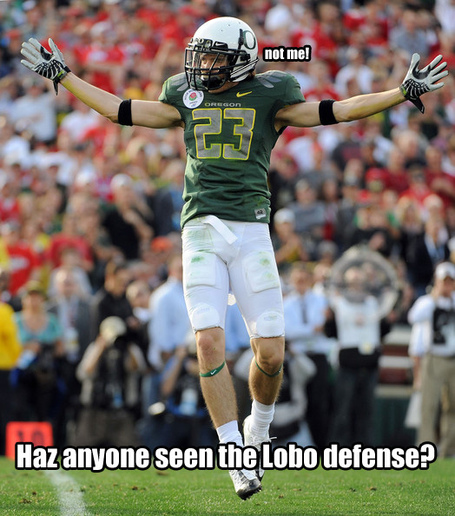 "I am confident it is going to work, and the only reason I am confident is because of the two guys we are doing it with," said BYU quarterbacks coach Brandon Doman. "I don't know that I look at it as a two-quarterback system. I am more looking at it as something that is best for the team."

The Rebels chances with a new starting quarterback in Mike Clausen:

The biggest thing for Clausen, though, is just not making mistakes. He was 52-of-88 passing the ball in 2009, with 463 yards, four TDs and two picks. He won't have to take as many downfield chances in the new offense, and his strong arm will fit the short-passing game well. For as tough as it will be to keep Wisconsin's offense off of the field, giving the Badgers extra possessions only makes the waters choppier.