Mountain West Football Week Three Of What We Learned

Share All sharing options for: Mountain West Football Week Three Of What We Learned

The Falcons are a really good team and I know this is really a far look ahead, but with TCU losing their quarterback next year, Utah and BYU out of the league, plus Boise State losing a lot of talent; the Falcons could be the favorite in next years Mountain West. They will have a senior quarterback alongside an offensive line that will be experienced. But, this years Falcons are not of the running by any means and will give Utah and TCU a run for their money with their option attack that took apart the Oklahoma defense.

Ouch, the offense is approaching or has already approached the low of the Gary Crowton era. The offense is just a hot mess and can not sustain multiple drives that are deemed successful with either quarterback at the helm. There was some success late in the first half against Florida State when Jake Heaps lead BYU to his first touchdown drive of the season, but after that there was nothing else going for BYU.

In the second half of yesterday's game BYU had five drives with the longest being 10 plays for 21 yards. Jake Heaps played the entire second half and showed a few signs of being a good quarterback, but he was sacked and pressured a lot. The offense for the second week in a row was terrible as they had only 171 total yards. The defense is nothing special either they gave up 428 yards of offense with 280 going in the running game. The Seminoles had almost two rusher who had 100 yards; Chris Thompson had 124 while Ty Jones had 96, and to throw salt on the wound QB Christian Ponder had 56 yards.

BYU is in real danger of losing to Nevada next week to be 1-3, plus it looks like BYU will lose games to Utah, TCU, and possibly San Diego State, plus do I dare say Wyoming.  This team might be a seven win team at best.

The Rams scored their first touchdown of the year and Pete Thomas looks to be good, but that seems to be about all the good news to come from me about Colorado State.  The Rams lost to one of the worst teams in college football, they have no running game, and a lack of defense.  The offensive line needs to get better to allow for a running game to try to develop and to give Pete Thomas more time to throw.  They are slowly falling to New Mexico status.

What to say... they started backup quarterback Taraen Austin which did nothing against Utah's stellar pass defense. There seems to be little to no bright spot for the Lobos they are just a bad football team.  The passing game is the only resemblance of any decent football, and B.R. Holbrook is being hobbled with a knee injury.  I guess Rocky Long knew when to leave this program.

We know they need to learn how to tackle (and not each other), see the aftermath below from Saturday's game. 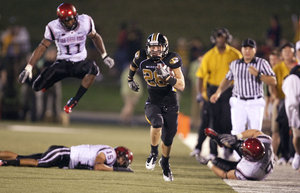 Seriously, the Aztecs are BACK!! (maybe) and Marshal Faulk and the late great Aztec coach Don Coryell should be proud.  The Aztecs have a beast in a running back with bowling ball in Ronnie Hillman who 228 yards, 93 yard long run, a 9.8 yard per carry average, two rushing scores, and a receiving touchdown.  Toss that in with the best throwing quarterback in the Mountain West in Ryan Lindley and the Aztecs are going to possibly challenge the top of the league.  I still will not believe it until I see it, but the Aztecs are on there way to their first bowl appearance in twelve years.

What is there to say, other then TCU is dominant.  Andy Dalton was his efficient self by passing 21 for 23, no picks, and two scores.  Ed Wesley ran for 168 yards in a romp over former SWC and current Big XII bottom feeder in Baylor. The defense did their thing and contained Robert Griffin.  We just know TCU is good and will not know more until they face a formidable opponent.

The Rebels were unable to get anything done against Idaho, but the bright spot is in redshirt freshman quarterback Caleb Herring since he is the type of quarterback to run the Bobby Hauck offense.  Herring went 4 of 7 for 87 yards with a touchdown and a pick.  To make things clear from Bobby Hauck is that Omar Clayton is still the starter.  Idaho was a bowl team and has the power of the 'stache from Rob Ackey, but the Rebel defense just let up point after point in the game.  Idaho did nothing special in this game yardage wise, but they scored when they needed to.

The backups can play and in the quarterback situation even the third string can play.  The offense moved the ball at will with backup quarterback Terrance Cain as he had another efficient game with no mistakes.  This was a game that allowed a lot of backups to see some playing time, and more importantly it let some players take an extra week off to recover form an injury.

They just ran into a much better team in Boise State and Wyoming could do nothing.  The running game was a complete disaster, and quarterback Austin Carta-Samules was 12 for 21, 156 yards, two picks, and one score. Wyoming was down 34-0 at the half, and this game may be more indicative of Boise making a case to stay in the BCS title hunt by putting on the throttle against Wyoming.  The Cowboys are not that bad, but still they needed to show up.