Last years game was a chance for BYU to make a statement on their season, and follow up their stunning win over Oklahoma a few weeks earlier.  Instead the Seminoles ran at will against BYU crushing their hopes to prove their worth as a national contender.  This year the Seminoles are rebuilt, at least with a new coaching staff that is taking over for the legend Bobby Bowden.  Jimbo Fisher is taking over from Bowden and he finally gets his say on the staff instead being regulated to a lower member of Bowden's staff even though he has been the coach in waiting for a while.

When the move was made the Seminoles received a boost in recruiting and not because Bowden was leaving but because there is now going to be some stability in Tallahassee.  Also, the fans instantly loved the move.

The offense should be more contemporary with Jimbo having full control of the offense, plus the fact the 'Noles return nine offensive starters.  Also, toss in that they are pushing hard for Christian Ponder for Heisman with a CP7 logo 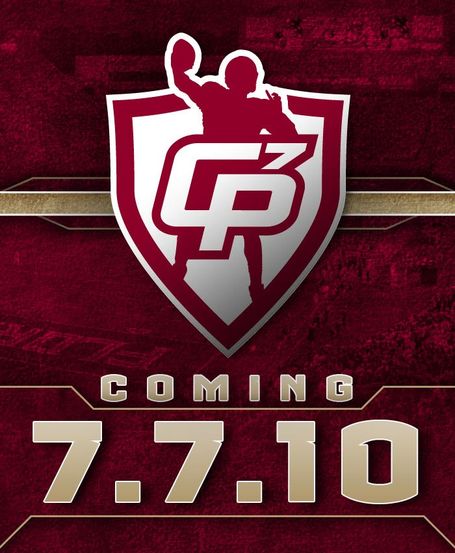 If Florida State has a good season then Ponder will be in the discussion for the Heisman, well because he plays at Florida State who was once a power program not to long ago.  The offense itself was not bad last year as they were a top 30 team in total offense, but Fisher will be able to have the control to run his style, and should be able to make the offense even better with his total control.

The player to watch on offense for FSU is new comer RB Debrale Smiley who is a JUCO transfer and could be a threat from day one:

a 6-foot-2, 240-pound sophomore signed out of junior college, has the size to make an impact in goal-line and other short-yardage situations. Smiley set school records for touchdowns in a season (35), touchdowns in a career (81) and rushing yards in a season (2,028) while starring at Thomas County Central High School in Thomasville, Ga.

Now the offense is predicated on Christian Ponder not getting injured and playing the entire season.  If Ponder goes down then the season will not live up to expectations and then there is the wasted money on the Heisman campaign for Ponder.  The offense will only get better with Fisher having total control.  Really, the offense is fine it is the defense that needs work.

Last year they were last in the ACC in total defense and 108th in the nation.  To remedy this Fisher hired one of the Stoops brothers to coach the defense with Mark Stoops taking on the challenge of putting a competitive defense on the field.  Stoops was at Arizona for the past six seasons and did a decent job in Tucson, but if he is able to turn around FSU's defense then he will get a head coaching job in no time.  He replaces the long time defensive coordinator Mickey Andrews who was very good during the 90's but dropped off considerably the past few years.

Last year they gave up a whopping 6.7 yards per play, and gave up more then 40 yards per game then the 11th place ACC team.  No position is safe as the new defensive staff had an open competition for all eleven spots.  Having a challenger looking to take your spot should make the defense at least more motivated if not better.  This is from the spring capsule at Rivals talking about the Seminole defense:

FSU must significantly improve across the board on defense. The Seminoles ranked 108th in the nation in total defense and run defense and 110th in pass efficiency defense last year. The line lacks an elite run-stuffer or a feared pass rusher. The Seminoles also have major holes in their secondary. They must replace each of their starting safeties and need someone to emerge as a shutdown cornerback to replace potential first-round pick Patrick Robinson. FSU does have a promising candidate to replace Robinson in sophomore Greg Reid, a former five-star prospect who earned significant playing time in the secondary and led the nation in punt-return average last season.

Also how does this make sense you return eleven offensive starters but lose three starters off of last years team.