Where I Come From: How I Became A Fan Of The Mountain West Conference

Share All sharing options for: Where I Come From: How I Became A Fan Of The Mountain West Conference

*This post is part of a week long series being sponsored by EA Sports NCAA Football 2011.*

I did not come to be a fan of Utah or the Mountain West conference until I stepped foot on campus at Utah back in 2003, and even then I was a casual fan that went to only a few games. Part of that reason was because my prior college which I attended was a non-scholarship I-AA football, and were not really good. Prior to heading to Utah my team was the University of Texas partly due that my brother went to Texas A&M just so that I could annoy him. Plus I kept tabs on BYU since I am of the same faith, and followed them to a lesser extent.

My fascination with the Mountain West and Utah came in the 2004 season when Utah was smashing their way through the Mountain West, but it I really got into the Utes in their season opening win over Texas A&M. My brother was sure they would not lose to the lowly Utes from the Mountain West, but that game was a solid beat down of 41-21 over Texas A&M and gave me some huge bragging rights over his former mighty Texas A&M Aggies. Side note on the Aggies, it is the best place I have ever been to see a college football game, even more so when they win.

The end of the game when everyone sways back and forth locked in arms and singing the school song is freaking amazing because the stadium looks like it is moving as well, and that game was against an average Oklahoma State team nearly a decade ago. Also, being in attendance of the Texas vs. Texas A&M game was also amazing, but for me the only way I got to go was if I would wear Aggie maroon which I did. Still that was worth it with the pregame festivities and that the game was a close one so my Aggie brother was not too upset they lost to the Longhorns.

Back to the current topic I followed the Utes in 2004 and went to every home game, plus I was in attendance at the Fiesta Bowl which was great to beat down Pitt, but kind of disappointing at the same time knowing there were better teams they could have played like Auburn. More on that game later in the week with the top fan moments post.

It was not until the summer of 2007 when I started this site to talk about the Mountain West, partly to complain over the television deal that left many -- including myslef -- without The Mtn. channel which was not on DirecTv until 2008, and the other reason was that the league was getting very little coverage since leaving ESPN. So, the summer of 2007 is when this site was formed and was run only by myself which was very difficult, but then joined SB Nation August of 2009 and have a handful of other writers doing a great job assisting me. If anyone wants some random listening my first few posts were actually podcasts, just check the archives of 2007.

The reason the site got off the ground was because I had the time to do so, because during the summer of 2007 I was a board operator for the single A baseball team Orem Owlz. Not the most strenuous or demanding work load, so that allowed me to research and get the site going during the summer, and I had such a great time that I decided to keep going during the season and spread the word of the Mountain West.

My main reasoning for championing a site dedicated to a whole conference was to get to know Utah's conference opponents better, and that ESPN was giving them virtually no highlights on any of the college football or highlight shows. I remember n 2007 when Utah smoked UCLA who was a top 10 team at the time and had zero highlights, even though then Utah defensive back Robert Johnson was the defensive national player of the week. So, I felt that the word needed to get out and let people know that the league is a good league (at least the top four) and needs to be paid attention to.

The league has not disappointed since I starting blogging about the Mountain West. 2007 was not a down year, but the league did not send a team to the BCS, but 2008 and 2009 were great years with Utah thumping Alabama at the Sugar Bowl, an epic game with TCU and Utah which was for that BCS spot, three teams being ranked in the final top 25 the past two years, and the league is looking to be on their way to gaining BCS inclusion. This year is very exciting TCU a darkhorse national title contender, Utah's last year in the Mountain West so we can see how Utah is treated on road games, BYU is breaking in the top quarterback from the 2010 class, and Air Force is quietly making a move to surpass BYU this year to get into the top three.

Now, since this is a conference wide site time to include some reasons to be fans of each of the nine schools.  With some commentary from other staff writers.

It has to be the tradition of the flyovers at home games.  Also, former head coach Fisher DeBerry that sounds eerily like Fog Horn Leg Horn.  Plus if fans remember the 1985 Air Force team which was ranked as high as 2nd in the country before losing to BYU by seven points which knocked them out of national title contention.  They ended up going 12-1, beating Texas in the Bluebonnet Bowl, and finished 5th in the final pools.

BYU has one of the greatest traditions in college football by dominating the WAC with the 1984 national title.  Below is the classic comeback in the 1980 Holiday Bowl win which I am sure is a huge moment in BYU history.

The best years of the Rams were with Sonny Lubbick and their best player in a long time was Bradlee Van Pelt that was a stud quarterback with crazy athleticism.

The Lobos have not had a great tradition, but at least under Rocky Long they were a pest in the side of the top teams in the league.  Their best player was Robert Ferguson, and the 2007 season was their first bowl win in over 40 years.

If anyone is a current Aztec fan I apologize, but the good days of Marshall Faulk are a good reason to be a fan.  The years ahead look to be better with Ryan Lindley to Vincent Brown which is possibly the best QB to WR combo in the nation.

Plenty of reasons to be a TCU fan dating back to the 30's when they won two national titles and they have one of the best quarterbacks in college football history Sammy Baugh, plus QB Davey O'Brien.  They also have LaDainian Tomlinson who was a machine at TCU, and now they just have a great coach who has them back on the national stage competing for BCS games.

Hoops is where UNLV succeeded with the Tark in the early 90's where they won a national title.  Football is another story where their highlights are limited with Randal Cunningham as their best player ever.   Hoops is their thing since they do have a 1990 national title.

Rebelfan1  -- I was a fan of UNLV right from the start. My dad used to take me to UNLV basketball games from when I was 3 and I'd fallen in love with them. Every time I heard something about the Rebels, I would want to hear more about them. But me being a kid, I didn't follow them that intently.

It wasn't until I was about 10 years old when I actually started following every game. Even if that meant listening to the radio until 10:00 P.M. I would hope for us to make the NCAA Tournament every year because we had just finished off the Isaiah Rider era and our only bright spot from there on was Shawn Marion. I would beg my dad to take me to as many of the basketball games as possible. We would always be in the balcony seats, but it was still great because we always seemed to win when I went to the game. Even to this day that record still stands pretty good. I've gone to a lot of UNLV basketball games and about 85% of them we won, including every game last year.

As far as football goes, I wasnt very interested at a young age. We never went to UNLV football and I didn't really follow it at all, except for overhearing a couple of guys talk about how the football team the year before at the Thomas & Mack Center. You see, I was a UNLV basketball fan, not football. I didn't even really follow college football until I was 12, and the only reason I even paid any attention was because of our epic win over TCU that season (although TCU and UNLV both were horrible).

For a while, i didn't follow UNLV athletics as much. I was getting older and neither UNLV football or basketball were very good. But when UNLV made their first run in the NCAA Tournament under Coach Kruger, I was an avid fan once again. I now had a reason to follow UNLV again, and once again love UNLV basketball.

I didn't start following football again until UNLV's massive upset of Arizona State. After that, I went to my first UNLV football game against Iowa State. It was the biggest crowd I had ever seen at Sam Boyd Stadium other when we played against Wisconsin. What a game that was, we won in overtime by an amazing catch by the then freshman Phillip Payne.

Ever since I went to that game, I follow UNLV football's every game. I don't follow it as intently as UNLV basketball just because with UNLV's football program hasn't had much hope in recent years. I hope that will change quickly with our new coach in Bobby Hauck taking over from Mike Sanford.

I really was an avid fan of UNLV for a while, but I hadn't really gotten much into blogging. I found Mountain West Connection when I was looking on google for information on MWC Expansion. The top link was an expansion article done by Michael and I thought the site was a pretty cool place. Mountain West Connection was unique because it would let you write fanposts and such so that you could express your thoughts on your own thread was on the front page... I became part of the staff in early April of this year and starting contributing on UNLV football.

They did have TE Jay Novacek who went onto Dallas Cowboys fame and one of the best tight ends in NFL history. They also have that barrel fan which for the life of me I can not find a picture or video of.  The closest thing I can find is the Denver Bronco barrel man.  Pay attention to Wyoming games and one will see barrel man at football games and hoops games sporting the barrel. 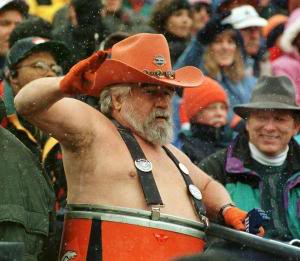 Go ahead and share your thoughts on your favorite team, and how you came to choose that team.