Share All sharing options for: ACC Uses Old Data To Prove They Are A BCS Worthy League

The ACC has not performed all that well in BCS bowl games with a 2-10 record and not having a single at-large spot in the 13 year BCS history.  Even with the poor BCS record, and their regular season performance as a whole the conference is assured of keeping their BCS bid due to their arrangement with the Orange Bowl.

ESPN's ACC blogger Heather Dinich mentions as much and puts a smiley face by mentioning the most complete data from the BCS computers from 2004-2007 has the ACC in good shape:

The ACC, though, is better than its record indicates if you measure the conference's performance during the regular season like the BCS officials do. Bill Hancock, executive director of the BCS, said the ACC has solidly earned its automatic berth in the BCS and there has never been any hesitancy on the part of Orange Bowl officials to continue their partnership. Instead, the data from the 2004-2007 regular seasons shows the league fared no worse than fifth among the 11 conferences in the major rankings used by the BCS to determine which conferences earn automatic qualifying status.

What she fails to mention is how poorly the ACC is doing at the current half way point of the BCS numbers which are worse then the Mountain West.  Below the jump is the criteria that Dinich is referring to which has the ACC in a very good position from 2004-2007. 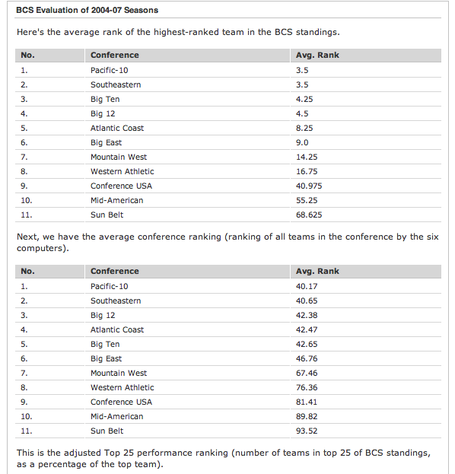 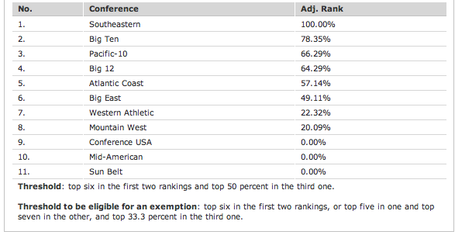 It is just very convient for Dinich to mention only 2004-2007 when saying the ACC is 'solid' within the BCS criteria but as any rational person can see from the chart above that is from 2008-2009 is not fooled by her attempt to pull a quick one by the readers.

The commenters in the post are astute and point that out with this astute commenter.

To indirectly respond to this commenter, Dinich is spinning by using the latest complete data that is irrelevant and while things can change with only two years of data the more relevant info is the last two years.

In saying that who would not try to defend the conference they cover, or dare be biased towards!