A Pac-16 League Will Save The Mountain West From Extinction

Share All sharing options for: A Pac-16 League Will Save The Mountain West From Extinction

The gigantic news earlier today came from the West coast where the Pac-10 is allegedly going to offer invites to the entire Big XII South -- sans Baylor -- and Colorado in a few days.  So much for those strict time lines, but could this be another Big 10 expansion accelerating only to be debunked the next day? It is possible, as anything is possible with this being the Great Realignment Battle of 2010.  So, the report from yesterday about the Pac-10 looking revolutionize college sports looks be coming true.

The rumor most recently was that the Big XII and Pac-10 would combine their forces for a huge television conference.  With a new television deal in the works it was safe to assume that the Pac-10 would not expand (so, I guess disregard my comments on the Todd Wright show from last night that said otherwise).  After having a few hours to digest this possibility it makes sense for the Pac-10 to make this move, because both leagues have deals with Fox Sports and it becomes much easier to negotiate with one league then try to make two leagues with a combined 22 teams happy.

The main sticking point with Pac-10 expansion is that a unanimous vote is needed for expansion, and the last time the Pac-10 tried to get Texas it was Stanford who said no.  This time a 10-0 vote would be likely since the divisions would bring back the old Pac-8 and would allow the original members to be in southern California every year by keeping UCLA and USC on the schedule; that was the sticking point within the league on who to invite. The divisions would then look like this:

In terms of the league set up with their very own tv network has SB Nation's Colorado site Ralphie Report in love with this idea of joining a super sized Pac-10 16 league:

Obviously, we have heard numerous rumors of imminent offers coming from a bunch of different conferences to a bunch of different schools that were nothing but neato fabrications so this should be taken with a HUGE grain of salt. However, as a Buff and Sooner and Pac-10 football fan, this would be absolute heaven for me.  Seriously, I can't think of anything more perfect and I don't think I would ever need to change the channel from this new conference's channel.  You would have to assume that this would definitely mean Missouri to the Big 10 and possibly Nebraska if an offer was put on the table.  Kansas, Kansas State, Iowa State and Baylor would be left scrambling.  Maybe a possible jump with Boise State to the Mountain West?

In other news from Colorado their athletic director MIke Bohn believes the invites will be coming soon:

Bohn said CU has not had any contact with the Pac-10 or its representatives and he was not clear on how he came to believe invitations could be forthcoming. But he said Colorado, Texas, Texas A&M, Oklahoma, Oklahoma State and Texas Tech could receive invitations possibly as soon as this weekend when Pac-10 officials meet in San Francisco.

"We're led to believe that that may be the case, but, again, there are so many different reports and different dialogues and different developments within our league and outside our league that prevents me from being able to predict what will happen," Bohn said.

"The longer that we were together in Kansas City it appeared that that rumor or speculation did have some validity to it," Bohn said in an interview with the Camera as he left the Big 12 spring meetings here today.

Now he is back pedaling faster then Deion Sanders with this: 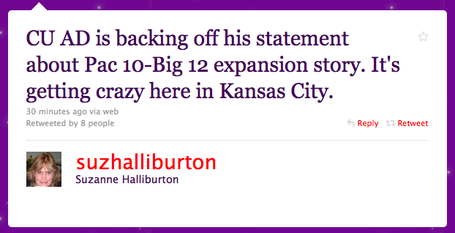 The Big XII was supposed to have press conference earlier today to discuss conference unity (ha!), but that has been postponed to tomorrow, but now it is time to say goodbye to the Big 12:

Then they straight up canceled the presser, issuing no comment and rescheduling for tomorrow.

Mirth aside, however, reports from Kansas City make it seem obvious that the Big XII isn't waiting, they're realizing that the end is here.

What a crazy few hours this afternoon, and to give credit where credit is due SB Nation's Big 10 site Rivalry Esq predicted the fall of the Big XII back in February. Now, onto the point of this site: time to discuss how the Mountain West can proclaim victory by not getting eaten up by the bigger leagues.

There is still a huge IF regarding this expansion talk, but lets just play along and see what the Mountain West can do.  The first good news is that Utah is not on this initial wish list to join the Pac-10 which means Boise State should not worried about joining a league that will be soon be torn apart by bigger leagues taking them away.

With half of the Big XII gone that leaves Baylor, Nebraska, Kansas State, Kansas, Missouri, and Iowa State left, and it is almost safe to assume that Missouri and Nebraska are going to the Big 10.  That leaves Iowa State, Baylor, Kansas, and Kansas State.  The real loser is Kansas hoops and possibly Turner Gill who left Buffalo to be in a BCS league.  Kansas could try to get in on the Big 10 action and possibly take Missouri.

On FoxSports radio earlier today they were saying put Baylor in the Mountain West.  That should not happen, I do not care that they are neighbors with TCU they are on par with Colorado State (if that) in football and bring nothing to the table.  My vote goes to Kansas which may mean bringing in Kansas State.  That is not a bad deal to have a top notch hoop program and an up and coming football program that all ready has BCS athletes and facilities.  At first blush Kansas State looks odd, but they would bring that 12th team to have a title game that now could be played in Kansas City in an NFL stadium.  Plus, traveling is a big issue so why not have two teams in close proximity to ease travel costs.

I have heard that those left over teams could muscle some of the MWC to a new Big XII but with five not very good teams they have zero leverage and say in the matter.  They will be at the mercy of other leagues.  So, Craig Thompson should add Boise State when the presidents meetings begin on Monday, and sit back and see what happens.  Once the carnage is done swoop in and take Kansas and Kansas State to form a 12 team league as soon as 2011.  Also, with the fall of the Big XII the Fiesta Bowl will have an open spot so why not give it to the former members of the WAC that help build the Fiesta Bowl to what is today.

We are aware of a story filed today by an Orangebloods.com columnist, speculating about possible expansion plans for the Pac-10 Conference. While many interesting scenarios have been suggested in numerous news reports, around the country, we remain focused on a thorough evaluation process that examines all of the options for increasing the value of the conference for our member institutions, our student athletes and our fans. We have not developed any definitive plans. We have not extended any invitations for expansion and we do not anticipate any such decisions in the near term.

So, far Big XII Commissioner Dan Bebee has been eerily silent today, perhaps he is prepping for his news conference that was canceled tonight and is being moved to sometime tomorrow.

For more info on this check the story stream on SB Nation's college page with constant updates.