The first important is to see where Bronco fans hang out which happens to be here at SB Nation with OBNUG which is a one of the better college blogs out there and the best Boise State blog out there.

The city has about 200,000 people residing there and the state has about 1.5 million, and is a lot similar to the other schools out west like Salt Lake, Colorado Springs, Provo, and Albuquerque.

Some history about Boise State which makes their football success is even more mind boggling:

Not bad for a school who is 15 years removed from I-AA football, and here is a glorious picture of their stadium that tv people watching hate. 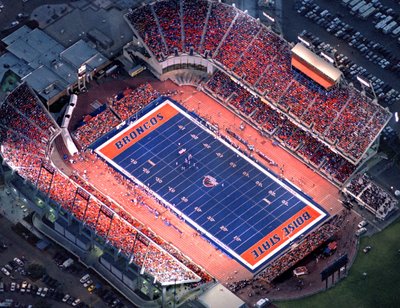 Boise State will bring over six mens varsity teams, they have seven but wrestling competes in the Pac-10, and ten women's varsity programs.

The basketball team has not been all that great, but they do have a nice name for their arena, Taco Bell arena. 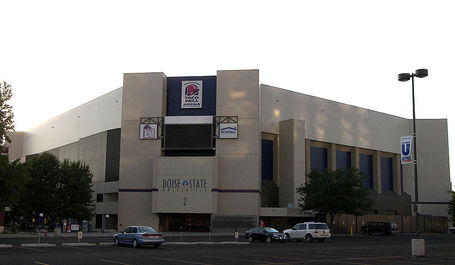 The arena looks normal from the outside, but in true wackiness of the Boise State colors scheme here is the inside of Taco Bell arena.  To be fair Boise State has been able to host a few NCAA tournament games. 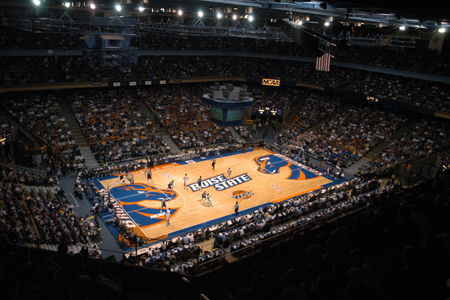 There best season in recent history was their 2008 season where they made a run in the WAC tournament as a four seed and beat New Mexico State on their home court in triple over time to receive an NCAA tournament berth.  Besides that 2004 looks to be one of their better season when they won two games in the NIT tournament over UNLV and Wisconsin-Milwaukee before losing to Marquette in round three.  That is the extent of the success of Bronco basketball.

So welcome Boise State to the Mountain West for the 2011 season.