The FedEx Orange Bowl Is No More

Share All sharing options for: The FedEx Orange Bowl Is No More

The bowl will still exist but the 21 year title sponsor of the game is removing their name from above the fold, their sponsorship was the longest of all the current BCS games.  The reason is that cable sports channel behemoth ESPN who holds the rights wants to squeeze the most money out of these rights they hold (unintentional pun there, but hey it works).

The game itself with low ratings could be a reason for the drop, but also that ESPN is forcing their hand for FedEx to become a more long term corporate sponsor, which is what FedEx is not going to do:

For more than two decades as an Orange Bowl sponsor, the game became FedEx's biggest annual hospitality event, with the company entertaining as many as 700 customers over three to four days in Miami.  While the game itself was important to FedEx, the company was not interested in a larger college football platform. ESPN is reserving bowl game entitlements for companies that buy a lengthy and more expensive college football package starting in September.  ESPN has hit the market with the Orange Bowl's title sponsorship and has begun negotiations with other brands.

On the surface this is not that big of a deal, and the only news would come from FedEx being the longest active sponsor for the big money games.  There is more to this because this is the first time a cable partner owns the rights to all five BCS games.  Understandably so ESPN wants to make the most money possible and thought that since FedEx sponsored the Orange bowl for over two decades that they would be interested in doing other business during the college football season.

Being a cable company that all ready makes money from subscriptions so an increase in something that moves over from over the air television to a subscription base seems a bit odd.  ESPN is on the most basic package and even though a high percentage of people have cable; ESPN will make more money in adding subscribers by holding the BCS rights while keeping them on ESPN rather then their over the air partner ABC.

Another reason to consider the FedEx drop is that people have been shipping less or not using the quickest method during the recent economic recession.  FedEx still plans to advertise with the Orange Bowl, but will not pay the increased rights fees.  Probably the biggest reason is that since the ACC formed their 12 team league they have not very good teams in the Orange Bowl in the past few year. 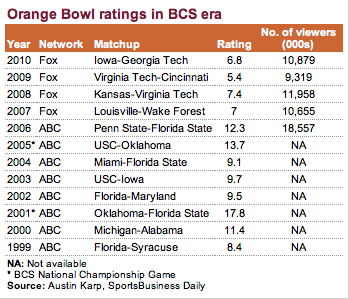 Or it could just be for lackluster ticket sales paired with very bad opponents in the Fox broadcast era.