Share All sharing options for: Non-BCS Teams Outperforming The Big East And ACC In BCS Games

Double standards exist everywhere and to no one's surprise the BCS is among those groups.  The non-BCS teams have sent a team to the BCS every year since 2004 -- sans 2005 -- and have produced some of the best BCS games, and have the ratings to back it up.  The Mountain West has been pressuring the BCS with the aid of congressman to make changes the BCS ever since the 2008 Utah team received zero consideration for the title.  The Mountain West hired Washington DC based lobbyist Arent Fox last year and was a key figure in assisting commissioner Craig Thompson's failed attempt at presenting an eight team playoff to the BCS.

Well, Fox is at it again this time and presents a very good argument that the non-BCS teams are out performing the Big East and ACC in regards to television ratings, attendance, rankings, but only receive half of the revenue. The chart below shows the BCS bowl games from 2007-2010 regarding all non-BCS teams against the Big East and ACC games. This time frame includes the Fiesta Bowl where TCU lost to Boise State last year.

To be fair two of the last four Orange Bowls consisted of a Big East verse ACC matchup, but actually that should have boosted the attendance factor.  The biggest disparity is in the revenue column where the MWC and WAC are at about half of the Big East and ACC, but they share with all five of the non-BCS schools where as the power leagues keep all the money within each league. 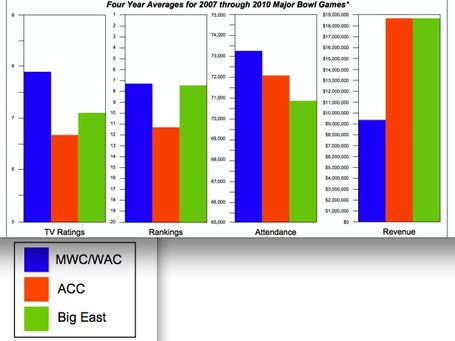 Andy Staples from Sports Illustrated brings some very good insight and questions why the Big East and ACC are still receiving auto bids while the Mountain West and Boise State from the WAC are not even considered.

Why does the BCS offer automatic bids to conferences that don't hold up their end of the bargain competitively or economically? And why do some major bowls continue to do business with the group when they know they're going to get lower ratings and draw teams that bring fewer fans? This information isn't new, but this is the first time anyone has presented the data this way.

It begs another question: Why do the ACC and Big East still hold automatic qualifying spots if they can't outdraw or beat in the ratings conferences with far fewer advantages? Obviously, the ACC and Big East beat the WAC and Mountain West in attendance and ratings during the regular season, but, as BCS leaders often point out, the BCS only controls college football's postseason.

BCS criteria was released and the MWC is top six in two of the three while the low performing ACC is below sixth in two of the categories, but somehow will still be able to keep their BCS berth:

... the ACC, though it currently stands at seventh in one category (number of teams in the final top 25) and eighth in another (average finish of the highest-ranked team), would almost certainly be granted an exemption from the formula, according to BCS coordinator Bill Hancock, to ensure that it fills its automatic tie-in with the Orange Bowl.

The BCS has claimed they do not violate any laws or antitrust issues, so how does a team that does not qualify by its own standards get to keep an $18-$20 million dollar payday?  The MWC which is sixth in two of the three and in the upper tier in those two, and a mere seventh in the other will have to petition its way in, and even that may not put them in the BCS.  Whereas the ACC has a contract with the Orange Bowl for a tie-in so they keep their spot.

There is the argument that the only reason non-BCS teams against BCS teams are rating so high and beating the Orange Bowl is because people want to see David win (that theory is proven to be mostly false) or because the opponent is a huge name (more accurate).

There is some truth to both sides but the biggest statement in favor of non-BCS teams being able to outperform BCS teams in the big money bowl games is the 2010 Fiesta Bowl against the 2010 Orange Bowl.  The Fiesta Bowl featured two non-BCS team with Boise State against TCU and the ratings were at 8.2 while the Orange Bowl that featured Iowa against Georgia Tech while those ratings were much less at 6.8.  The super large alumni base the Big 10 had was not enough to outperform a private school in TCU who has less then 9, 000 students where Boise State has a reasonable student base of 19,000; now compare that to Iowa who has 30,000 students.  Even the Sugar Bowl that featured Tim Tebow and the Florida Gators barely outdrew the Fiesta Bowl with an 8.5.

So, at least during the past four years the non-BCS teams in BCS bowl games have outperformed the ACC and Big East in the key factors that bowls wan for a successful product: attendance and television ratings.  The department of justice may have to take a gander at this chart.