The best of the best of college football magazines by Phil Steele is releasing his pre season All-conference teams in addition to his All-American team.  Phil goes deep with four teams. Click the image below to enlarge. 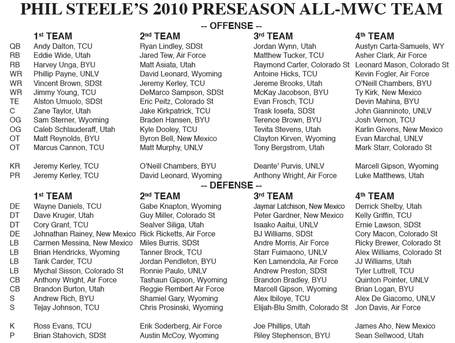 Obviously their is a change that needs to be made now that Harvey Unga is not returning to BYU.  A replacement for Unga on the first team would be either Utah's Matt Asiata or Jared Tew from Air Force.  The edge should go to Tew since he is the primary back for the Falcons while Asiats is very good, but he is coming off of the ACL injury and the Utes will have a split backfield.  Adding a back is a bit more difficult it could be the leader of the BYU rushing attack or it could be Channing Trotter or CJ Cox from UNLV.

TCU leads the way for first team selections with eight with Utah coming in at second with five first team members. Below, is the All-American list that has a handful of Mountain West players.

TCU has a solid four All-American selections which is tied for second with North Carolina and only behind Oklahoma's six selections. Again click on the image for a larger version 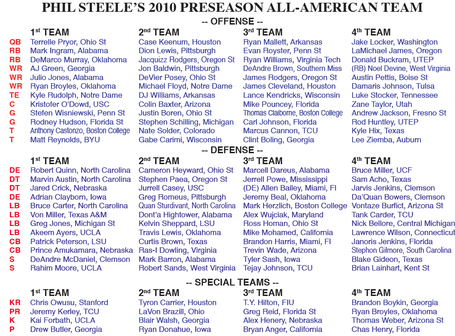